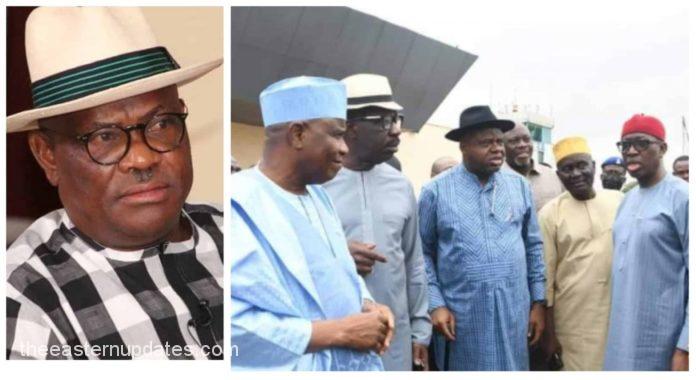 The Eastern Updates reports that some of the State governors of the Peoples Democratic Party, PDP, have arrived in Osun State ahead of Saturday’s governorship election but unfortunately one of the spearheads of the party, Governor Nyesom Wike seems to be absent while confirming previous reports that he is still at loggerheads with other stakeholders in the party.

The PDP governors had stormed the state for the PDP’s mega rally in favour of the party’s candidate in the election, Ademola Adeleke.

However, Governor Nyesom Wike of Rivers State was noticeably absent.

Wike had been reported to be aggrieved with PDP’s leadership over the choice of Okowa as Atiku’s running mate.

The Rivers governor, who came second during the party’s presidential primary, was believed to have been eyeing the Vice Presidential slot which went to Okowa.

In another report, a political economist, Professor Pat Utomi, on Tuesday said the Labour Party has a better structure than the nation’s two dominant parties – the ruling All Progressives Congress (APC) and the Peoples Democratic Party (PDP).

Utomi, a member of the Labour party, made this known while appearing as a guest on Channels Television’s Politics Today which was monitored by The Eastern Updates.

He expressed confidence that his party will coast to victory in the 2023 presidential election, which is barely seven months away.

‘Labour Party has a super structure, much better than the structures APC and the PDP have,’ he said. ‘The Labour Party is built around the labour movement and a college of civil society organisations.’

According to him, the Nigerian Labour Congress (NLC) and the Trade Union Congress (TUC) have political commissions in every state of the federation.

He stated that the party will mobilise people during the forthcoming polls to ensure that every polling booth is covered.

Utomi however decried a situation whereby those in public office would steal money to rig elections, a situation people have mistaken to be political structures.