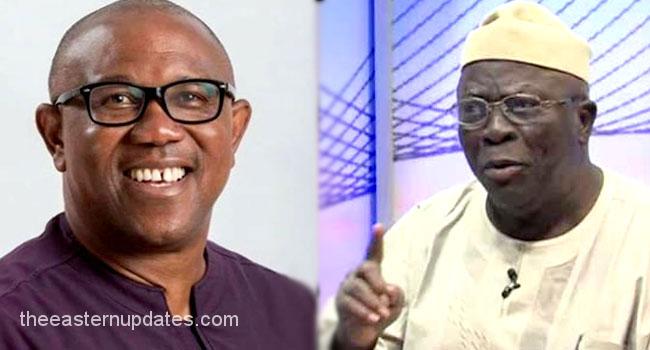 The Yoruba socio-political group, Afenifere has provided justified its decision to back the presidential candidate of the Labour Party, Peter Obi, for the 2023 elections.

The group’s leader, Chief Ayo Adebanjo, made its position known at a press conference in Lagos.

Justifying the decision, Adebanjo said the group would not compromise the principle of justice, equity, and inclusiveness because the presidential candidate of the All Progressives Congress, Asiwaju Bola Tinubu, is a Yoruba man.

He said, ‘The South-West has produced a President and currently sits as Vice President; the South-South has spent a total of six years in the Presidency, but the Igbo people of the South-East have never tasted presidency in Nigeria, and now that the power is due back in the South, equity demands that it be ceded to the Igbo.

Read Also: 2023: Why We Endorsed Obi Ahead Of Tinubu – Afenifere

‘We cannot continue to demand that the Igbo people remain in Nigeria while we, at the same time, continue to brutally marginalise and exclude them from the power dynamics.

‘Peter Obi is the person of Igbo extraction that Afenifere has decided to support and back; he is the man we trust to restructure the country back to federalism on the assumption of office.

‘We will not compromise this principle of justice, equity, and inclusiveness because one of our own, Asiwaju Bola Tinubu, is a frontline candidate. It is on this same principle we condemn the Peoples Democratic Party for sponsoring Atiku Abubakar, a Northern Fulani Muslim to succeed Muhammadu Buhari another Fulani Muslim.’

However, in his reaction, the APC spokesperson, Presidential Campaign Council, Festus Keyamo, accused Adebanjo of promoting his agenda as the position of the pan-Yoruba group.

Keyamo told reporters on Monday that he stood by an earlier statement released by the council’s Director of Media and Publicity, Bayo Onanuga.

He said, ‘We stand by the statement issued yesterday (Sunday) by our campaign council media director. Afenifere is not the mouthpiece of the Yoruba. The release comprehensively addressed the matter.

‘The issue is that the Afenifere in question is just Pa Adebanjo trying to project his personal bias against Asiwaju. He is not pursuing any pan-Yoruba act of patriotism as claimed. No, he is not.

‘Besides, his view is not the position of the entire Afenifere. He is just a factional member of the group. We are aware that there was no time Afenifere met to take such a decision.’

Onanuga had, in an earlier statement, described Adebanjo’s endorsement of Obi as a personal decision.

While admitting that he is free to support anyone he likes in furtherance of his democratic right, the media director stated that the elder statesman does not speak for the Yorubas.