HomeFeaturesHundreds Of Shops Marked For Demolition By Anambra Govt
Features

Hundreds Of Shops Marked For Demolition By Anambra Govt 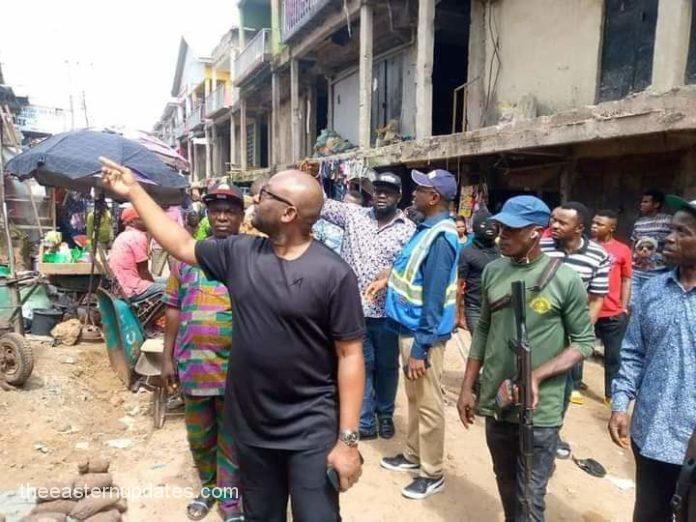 In a bid to restructure development in the State, the Anambra State Government under the directive of Governor Charles Soludo has marked some shops and stalls for complete demolition and clearing.

The Anambra State Government had last week already commenced the demolition and clearing of some of the buildings and structures which considered to be sitting on drainages and waterways.

Among those already demolished are two Catholic Churches, and another pentecostal church which is owned by controversial Pastor, Chukwuemeka Ohanaemere, alias Pastor Odumejem which had caused a lot of outrage from Nigerians in general.

Meanwhile, more structures have been marked for demolition, this time in the busy Ochanja market

A team led by the Anambra State Commissioner for Commerce and Industry, Dr Obinna Ngonnadi who were in the market on Friday were said to have marked several hundreds of shops for demolition.

The structures were said to be either illegal structures or unfit structures, and have been marked for removal.

A source said: “According to officials who came to the market, most of such buildings were built without approval while others lack integrity test and structurally deficient and thus pose a great threat to the lives of traders, customers alike and other property nearby.”

In another report, some of the traders at some of the major markets in Anambra State, particularly Eke Awka market in Awka South Local Government Area have vented their frustrations while openly lamenting on the new tax regime which the governor, Prof. Chukwuma Soludo has slammed on them.

The traders also massively lamented about the rationale behind why they are being forced to pay multiple taxes and levies on a daily basis in the market.

It had also been gathered that most of the shop owners in the markets were being taxed as much as  ₦14,200 while the hawkers were randomly forced to pay  ₦200 at various times and places every day. A breakdown of some of the levies includes stallage fee of  ₦4,800, market development fee of  ₦2,400, market traders fee of  ₦3,000, pollution/sanitation fee of  ₦,000, biometric market registration of  ₦700.00, and market operation fee of  ₦1,300.00.

Governor Charles Soludo had, during a meeting with parks and market executives in the state, disclosed the introduction of a new tax regime in the market.