FG Has To Release Nnamdi Kanu From Detainment – Gov Ortom 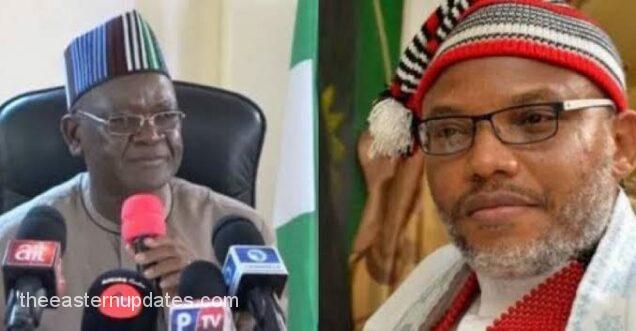 Samuel Ortom who is the Benue State Governor, has called on the Federal Government of Nigeria to release the detained. embattled Indigenous People of Biafra (IPOB) leader, Mazi Nnamdi Kanu for peace to reign in the country.

Governor Ortom had also reiterated that if the peace process in the country could only be taken seriously if Kanu was released from prison.

Ortom said the release of Kanu is a socio-political challenge that must be dealt with politically. He also lamented that even Boko Haram members who posed a greater threat to the country’s unity had often been pardoned, freed and reintegrated into the society.

Ortom tweeted: “If the peace process in the country is to be taken seriously, I call for the release of the detained leader of the Indigenous People of Biafra, IPOB, Nnamdi Kanu.

“This is a socio-political challenge that must be dealt with politically.

“Even Boko Haram members who pose a greater threat to the country’s unity have often been pardoned, freed and reintegrated into the society.”

In another report, Bruce Fein, the United States, attorney for Nnamdi Kanu, the embattled leader of the Indigenous People of Biafra, IPOB, has issued an open warning to the Nigerian President, Muhammadu Buhari-led Federal Government over the safety of his client.

Fein warned that Kanu must not be assassinated by Boko Haram and ISIS in the cell of the Department of State Services, DSS.

He had also cautioned that the price would be incalculable if Boko Haram-backed ISIS assassinate Kanu.

Reacting to the Kuje prison break, Fein tweeted: “The criminally infested Buhari administration would be well advised to refrain from using the seeming faux July 6 Boko Haram-ISIS unchallenged attack on Kuje prison as dress rehearsal to assassinate MNK with terrorist organizations as accomplices. The price would be incalculable!”

Gunmen believed to be Boko Haram had broken into Kuje Correctional Facility in Abuja last week.

The terrorists released all their members locked up at the facility. Meanwhile, Kanu is detained in DSS custody on the orders of an Abuja Federal High Court.

The Justice Binta Nyako-led court had failed to grant Kanu bail during the last sitting.

The Indigenous People of Biafra (IPOB) had recently raised the alarm over an alleged secret plot by the terrorists who attacked the Kuje Correctional Centre to kill its leader, Nnamdi Kanu who is currently in the custody of the Department of State Service (DSS).