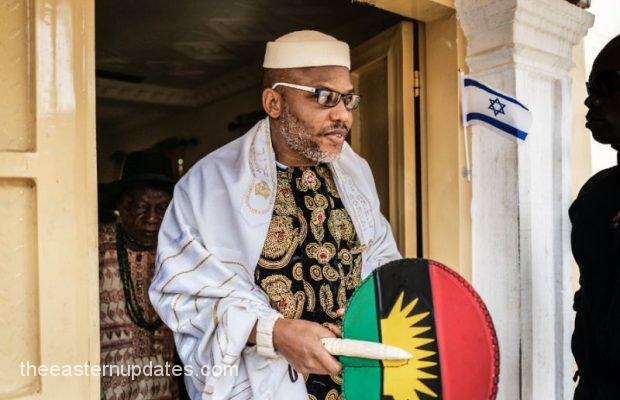 The Governor of Benue State, Samuel Ortom has called on the Federal Government to release without delay, the detained leader of the Indigenous People of Biafra (IPOB), Nnamdi Kanu.

He said Kanu’s release would allow the peace process in the country to be taken seriously.

He stated this when he received in audience, the American veterans of Igbo origin in Washington DC, US.

He said Kanu’s case was a socio-political challenge that must be dealt with politically.

In a statement by his Senior Special Assistant on Diaspora Affairs, Rev. Peter Ichull, in Washington D.C, Ortom disclosed that even members of Boko Haram who posed a greater threat to the country’s unity were freed, resettled and some integrated into the armed forces.

He said the South East must be given a sense of belonging to erase the impression that a section of the country was persecuted.

The Benue governor, however, called on the Igbo veterans in the United States to believe in one Nigeria, even as he said no country is without its challenges.

He called on the veterans to support the peace efforts in the South East so that both their communities and investments would experience sustainable growth and prosperity.

He told the group that power shift to the South East is possible if people of the region were united.

He went on to thank the group for appreciating his modest contributions to national discourses, but challenged South-Eastern Nigerians living abroad that charity begins at home, saying ‘there is nowhere better than home but only peace and security can guarantee the success of your investments back home.’

President of the group, Dr. Sylvester Onyia, praised Ortom for his fearlessness position on Nigeria’s ills, saying that only such a stand from leaders could build bridges of understanding and give hope to despairing Nigerians abroad that one Nigeria is possible.