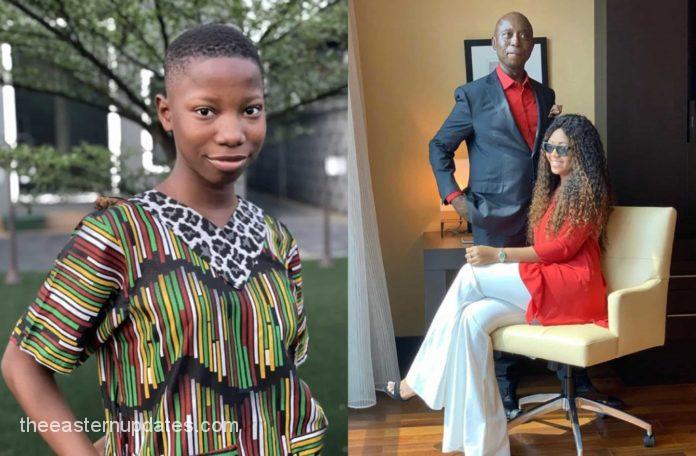 Nigerian superstar comedienne, Emmanuella Samuel has openly debunked some speculations that billionaire Ned Nwoko had recently proposed marriage to her and held marriage talks with her family.

Rumours were rife that the politician and billionaire who is married to Regina Daniels, was attempting to wed the teenage kid sensation.

Peace Samuel wrote: “I don’t know how true it is. That Ned Nwoko is already receiving a marriage list from your parents.

“Pls if true…please don’t spoil your future. U don’t know what marriage is”, the fan added.

In her response, Emmanuella stated: “Fake news ma, Thanks.”

“Ned Nwoko is currently in talks with Emmanuella’s family over a marriage proposal list, though the fee was undisclosed owing to family refusal.

“Ned is prepared to make another offer that will see Emmanuella being transferred from Port Harcourt to Asaba via a marriage deal”, it reads.

Born July 22, 2010, the comedian is one of the most popular in Africa with more than 16 million social media followers.

In another report, Ned Nwoko, has come out to openly debunk all the rumours that he proposed marriage to Nigerian superstar Emmanuella Samuel.

However, the husband of actress Regina Daniels, in a post on his Instagram page described the report as fake news,

When asked by a fan if he intends to marry Emmanuela, Ned who last week welcomed a son with Regina Daniels said that he has beautiful wives.

The fan with username, don.makas.165 had asked, “Ned, I hear say you wan marry Emmanuella. Is it true or false?”

Ned responded, ”I have beautiful wives.”

Another fan @jennifereverest24 asked, ”the news about you and Emmanuella, is it true?”

Ned responded, ”It is fake news.”