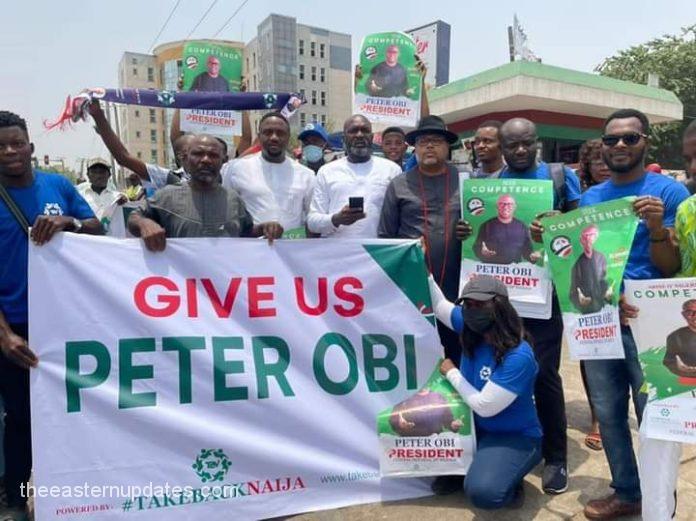 Some of the Enugu State youths leaders, under the aegis of Concerned Enugu Youth have on Monday declared that the youth rally at Nsukka in support of Presidential candidate of Labour Party, Mr Peter Obi was not to malign Governor Ifeanyi Ugwuanyi of Enugu State.

The youth made this known after a rally which had been held in Nsukka, Enugu State, in support of the presidential candidate of the Labour Party, Mr. Peter Obi.

The youths had also mentioned to journalists at a press conference addressed by Nebo Samuel Ebube,  Edeani M. Edeani, Nwodo Thomas-Moore Obumnene and Emmanuel Martina Nyia, that the rally in support of Obi was based on his personality and not because of any political party.

Read Also: INEC Reacts To Burning Down Of Enugu Office

According to them, Governor Ugwuanyi enjoys mammoth support from the youth constituency irrespective of political inclination owing to the unprecedented way he had carried them along in the governance of the State.

They commended “the teeming Youth of Enugu State in Nsukka zone, who out of necessity and for their sincerity of purpose, came out in numbers to identify with Peter Obi, the Labour Party presidential candidate.

“It is worthy to note that Mr Peter Obi has been engaging the youths on the need to be part of a new Nigeria and encouraging them never to give up on our dear country Nigeria while working for better days ahead.

“We want to state categorically that it was Peter Obi’s personality and not about Labour Party that the youths are championing his cause.

“It is pertinent to state openly that Peter Obi has identified with the youths all over the country and that the youths have their fundamental rights to reciprocate same.”

The youths declared that “Governor of Enugu State, Rt. Hon Dr Ifeanyi Ugwuanyi has identified with the youths of Enugu State and we have reciprocated and will continue to do same.

“We are proud enough to bring to the general public that our decision to stand with Governor Ifeanyi Ugwuanyi is not in anyway because of his political party, but our act of gratitude for what he has done and is still doing in the Enugu Youth Constituency.

“Our stand is not political party-affiliated, but influenced by our quest for good governance in Nigeria.

“We always come to conclusion that it is our future that we are discussing and we are most concerned on who will secure this future for us.

“We openly want to admonish other aspirants, regardless of party affiliation to see the young people as their number one priority.

“We further want to advise all the aspirants that wish to hide under the love we have for the governor to note that our love for Ugwuanyi is personal and not political-party affiliated.”

“We urge the general public to disregard any paid social media bandit who is trying to say that the youth rejected the Governor. That cannot be possible when many young persons have been given opportunity to prove their capacity in this administration even when the Governor doesn’t know them before his emergence as the Governor.

“Any young person speaking against Ugwuanyi is either a paid miscreant or none indigenous youth of Enugu State who is under a spiritual siege to tarnish the image of the Governor.

“We sincerely wish to advise the youths to avoid any social media attack on Ifeanyi Ugwuanyi or have us to severely contend with.

“We humbly wish to inform His Excellency, the Governor that our love for him is personal as our little way of showing gratitude.

“We humbly wish to plead with the youth-friendly governor, Rt. Hon. Ifeanyi Ugwuanyi to please disregard any disappointment he is recently getting from the youth constituency and know that development of the youth constituency is a divine project that God gave him and should please remain focused with us as he has been doing.

“We urge the youths of Enugu state to remain peaceful, law abiding, never to be used by any politician for physical or social media blackmail. Those are people who have nothing to offer to our future. Remember, there is a life after election.

“We want to use this medium to charge the entire youth and the youth leaders of Enugu State to go down to their communities for PVC sensitization and registration, for elections are not won on social media,” they further stated.