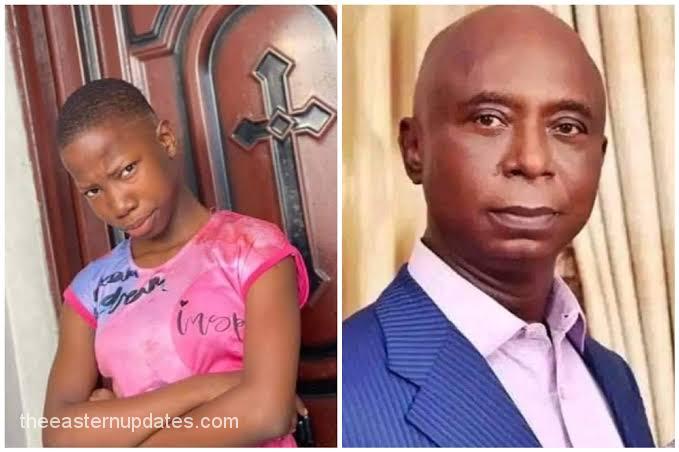 While reacting to some of the new reports making round about his marriage to Emmanuella, Nigerian billionaire, Ned Nwoko, has come out to openly debunk all the rumours that he proposed marriage to Nigerian superstar Emmanuella Samuel.

Reports had it that Ned Nwoko had made an attempt to wed the teenage star.

It was alleged that Ned Nwoko has also been in talks with Emmanuella’s family over a marriage proposal list.

However, the husband of actress Regina Daniels, in a post on his Instagram page described the report as fake news,

When asked by a fan if he intends to marry Emmanuela, Ned who last week welcomed a son with Regina Daniels said that he has beautiful wives.

The fan with username, don.makas.165 had asked, “Ned, I hear say you wan marry Emmanuella. Is it true or false?”

Ned responded, ”I have beautiful wives.”

Another fan @jennifereverest24 asked, ”the news about you and Emmanuella, is it true?”

Ned responded, ”It is fake news.”

Ned Nwoko, had also previously put out a statement that the Igbos in Nigeria are a very selfish set of people and therefore, they are not ready for the 2023 presidency.

According to his statement, he reiterated that although the Igbos have been clamouring for the presidential seat, the votes from delegates during primaries had proved otherwise.

He had also made note of the fact that Igbos were very selfish and would rather think of themselves than others, the reason he believes most delegates chose other candidates from other tribes not Igbos.

Speaking with BBC Igbo, Nwoko said, “Igbos are not ready for the presidency . It is not just enough to talk about it, we are not ready and I’m talking about the political class and the voters. If the people are ready for Igbo presidency that would have been shown by the result from delegates.

“Very few delegates from the East supported Igbo candidates, they supported somebody else for other reasons. Ask Imo delegates why they chose another person as opposed to Umahi.

“Igbos are largely very selfish, the typical Igbo man is thinking about himself and not the well-being of others. If they were, they would stick with an Igbo person. I think the best person from Nigeria should come from anywhere. I’ve never subscribed to zoning and believe in merit.”