HomeFeaturesDoctors Withdraw Services Over Abduction Of Colleague In Abia
Features

Doctors Withdraw Services Over Abduction Of Colleague In Abia 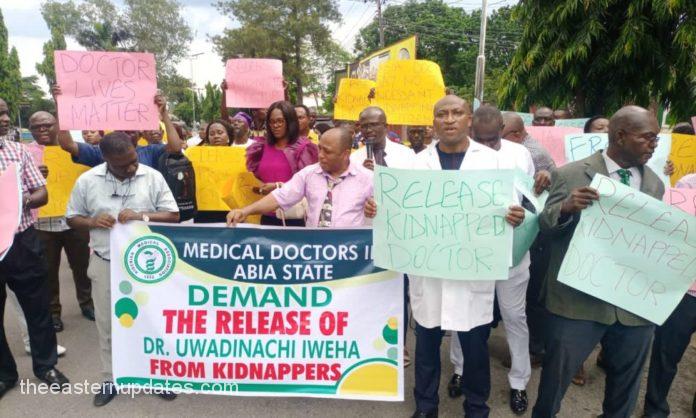 Abia State medical doctors under the umbrella of the Nigerian Medical Association (NMA), Abia State chapter, on Tuesday declared an indefinite withdrawal of their services in both private and public health facilities.

They said the service withdrawal is to register their displeasure for the kidnap of their senior colleague, Prof. Uwadinachi Iweha, in his Umuajameze Community, Umuahia South Local Council of the state, few kilometers from Umuahia, the state capital, nine days ago.

Iweha, who teaches at the Umuahia campus of the College of Medicine, Gregory University Uturu, is the fifth medical doctor to be kidnapped in the state within the past three years.

Addressing the doctors at the Federal Medical Centre (FMC) Umuahia, after they staged a peaceful protest, carrying placards and praying for Iweha’s release, the state NMA Chairman, Dr. Chimezie Okwuonu, said the withdrawal of services by the doctors would give them time to join Iweha’s family to search for him.

He said: ‘We shall take out time to pray for Iweha and carry out a peaceful rally to show that we stand by our own in this time of trial.’

He, however, said emergency services would still be rendered to members of the public. He added: ‘It is our utmost desire that the government enables the release of our colleague and restore the peace and security we enjoyed. We ask members of the public with useful information about the abducted doctor’s where about to report to the nearest police station.’

Decrying the kidnap incident, he FMC Medical Director, Prof. Azubuike Onyebuchi, expressed worry that the doctors’ service withdrawal would impact medicare-seeking members of the public, especially the poor, who can’t afford the fees charged by the private hospitals, and who depend on FMC, which is the only functional public medical institution in the area.

Onyebuchi tasked the doctors to devise possible ways to reduce the impact this may have on the poor, as they continue to do whatever they can, including working with his family and security agencies to ensure the release of Iweha.