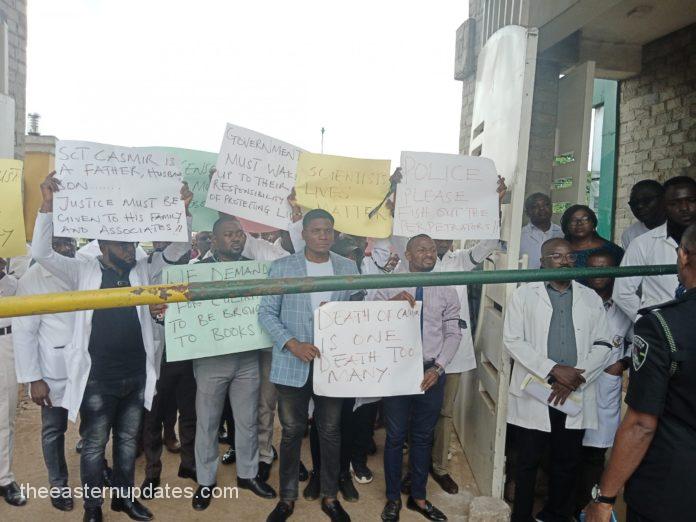 The Association of Medical Laboratory Scientists of Nigeria, AMLSN, Ebonyi State chapter, has protested the gruesome murder of one of their colleagues, late Casmir Afamefuna Ani by unknown gunmen.

The Eastern Updates reports that the victim, Ani who is a father of four was murdered on Friday night at Oji-Owere Street located at the Abakaliki metropolis.

The association, which protested to the Ebonyi State Police Command, Abakaliki, were carrying placards with the following inscriptions: ‘AMLSN demands thorough investigation’, ‘We demand for culprit to be brought to book’, ‘Police please fish out the perpetrators, the death of Casmir is one death too many’, ‘These senseless killings must stop in Ebonyi’.

Other placards read: ‘Justice must be given to this family and association’, ‘Government must wake up to their responsibility of protecting lives’, etc.

The association in a letter of grievance signed by its chairman and secretary; Clement Alobu and Godwin Nwibo respectively, which was submitted to the Commissioner of Police, Aliyu Garba, tasked the security operatives to fish out the perpetrators of the crime.

The letter reads in part: ‘lt is with deep emotional pain and bleeding hearts that we, the members of the above-named Association write to inform your office of the gruesome murder of Mr. Casmir Afamefuna Ani who was our member and professional colleague, on the night of Friday, June 10, 2022, around Ojeowere street, Brackenbury street area in Abakaliki.

‘With this ugly development, we no longer feel safe to even do our jobs since one of us could be murdered so easily without any intervention by the law enforcement agents or even the state vigilante outfit, alias Ebube-Agu.’

In a swift reaction, the Garba said he is aware of the killing of Ani and vowed to bring to book the perpetrators.

Garba, who was represented by the Deputy Commissioner of Police in charge of the State Criminal Investigation Department, DCP Robert Clement, further called for the collaboration of the association and the public to get to the root of the matter.