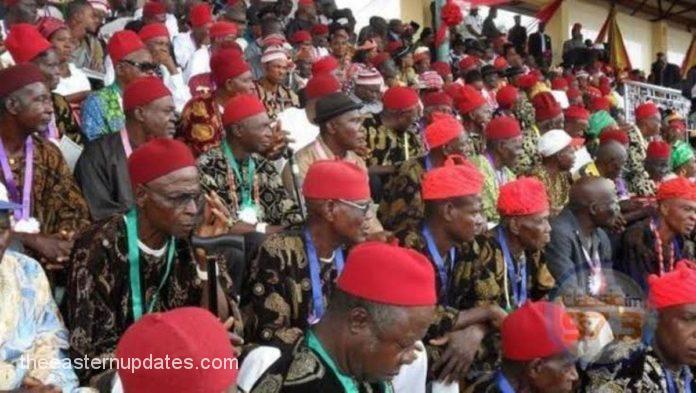 Last week, there was some serious uproar on social media following reports of attacks by hoodlums who reportedly unleashed mayhem on Igbo traders who had shut their shops to register for PVC in an Igbo-dominated part of Lagos state.

Despite widespread condemnation of the actions of the misguided elements from many Nigerians especially those of Igbo extraction, the loud silence of the government of the State has opened up new conversations about the entity called Nigeria and what the best way forward should be.

The truth is that such attacks are not new to Lagos State. The ugly monster has often reared its ugly head during almost every election period. As a way of disenfranchising and intimidating ‘unfriendly’ voters, violence has often been unbridled by strong forces in Lagos State to bully Nigerians who are mostly of Igbo extraction into submission or at best, stay off casting their votes during elections. A similar ugly scenario had played out before the 2015 general elections when the most revered Oba of Lagos made his well-known threat of ensuring that Igbos who failed to vote for his preferred candidate were swallowed up by the Lagos lagoon, that threat did not go without consequences as many voters in Igbo dominated areas of the state were disenfranchised on election day by thugs. The sad truth remains that, these happenings have gone on without consequences, it is actually time for Ndi Igbo to have a rethink, only a fool does the same things over and over again, yet expects different results.

It is pertinent to note that the friction often witnessed in Lagos and other parts of the country has often been fueled by mutual distrust and fear of ethnic domination which are mostly anchored by historical prejudices and primitive mindsets. These things have continued to thrive because the idea many Nigerians from all parts of the country have about nationhood has failed to aggregate. The tension is further fueled by an unhealthy competition for power that has divided the country more than it should unite it.

With next year’s general election in view, it is safe to assume that unimaginable violence would still herald it. The candidate of the All Progressives Congress who is also the former Governor of Lagos State, Bola Tinubu would be on the ballot, and given how ruthless he has always been about politicking, he would not be sitting down and watching Igbos go to the polling booth and not vote for him. So, this raises questions about whether Igbo’s should continue going through all of that brutality just to exercise their civic duties.

The Igbos are arguably one of the most cosmopolitan, demographically diverse, and sociologically adaptive of Nigeria’s major ethnic groups. They always take pride in their spirit of hard work even as they rely on their ingenuity, and resilience to confront the challenges facing them. They can be found in every nook and cranny of Nigeria, and they have a penchant for working tenaciously to become indispensable members of their local communities by simply adding value to them. Now, the truth remains that, owing to these realities, Ndigbo are more ‘Nigerian’ than all other ethnic nationalities.

It is therefore a paradox that today, Ndigbo from every indication appear to be at crossroads, wondering what they want out of Nigeria’s fragile and troubled journey to nationhood which has largely remained elusive for all intents and purposes. A few weeks ago, a good number of Ndigbo were on social media campaigning to dismember Nigeria. For some others, taking their political destinies into their hands by supporting Presidential candidates of Igbo extraction in next year’s general elections was better. However, the truth is that for fairness, equity, and continued harmonious co-existence of Nigerians there is some serious need for restructuring.

Nigeria as configured today is to a large extent a unitary state in reality although it has continued to sound federal in name. The existing status quo is of no value to Nigerians and it is indeed stunting the progress of the country. It is true that a small cliche of parasitic political and business elites in all parts of the country have continued to exploit the current system for personal aggrandisement, it is however a statement of fact that the system is unsustainable.

Many of the youths from the South East who are clamouring for ‘Igbo Prsidency’ sadly do not understand that given the present system, even the best technocrat would fail as President of Nigeria. The reasons are not far-fetched, The fraudulent 1999 constitution which was foisted by the military class is the biggest clog in the wheel of any meaningful developmental agenda any Nigerian President would seek to implement. Given the present structure, any Presidential aspirant promising Nigerians an eldorado is implying delusional.

In sane countries, it is their citizens that decide on their constitution and determine how they want to live. In Nigeria, the story is reprehensible. What we have here is that criminals simply dethroned civilian governments and wrote decrees which were simply self-serving and criminal. Sadly, successive governments have employed that evil document to destabilise the country for decades and nobody seems to get it. Voting in Nigeria’s next general elections is simply an endorsement of that fraud called a constitution.

The earlier Ndigbo understands that the problems of Nigeria which include the unjust structure of the country can be traced to this vile document which they call a constitution the better. It is not only a wicked but worthless document and until it is shredded and destroyed, they can only continue be dreaming.

As an alternative to the noise and clamour for Igbo Presidency, Ndigbo must advocate restructuring where certain changes would be effected. The insecurity bedeviling the land can be taken care of by state policing systems. a single tenure of 6 years should be proposed for the Presidency and it should be rotational. An overhaul of the educational system can be made possible and the revenue-sharing formula can be tinkered with to reflect present realities. All these and many more can be advocated when Ndigbo and other ethnic nationalities in Nigeria are able to sit down at a round table to have a frank conversation about the future of Nigeria. With these, the attack on innocent people in Lagos and other parts of the country would be completely phased out. It is time for Ndigbo to put on their thinking caps.

Was Ikpeazu Elected To Serve Abia Or Wike?