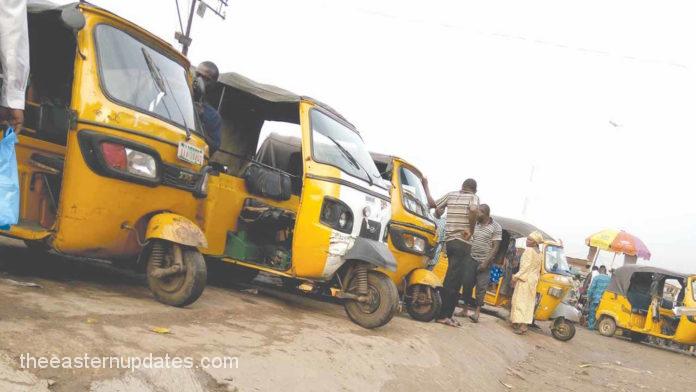 As the spate of insecurity in the State hits an all time high, the Enugu State government and security agencies have inagurated fresh plans to decisively address the security challenges in Igbo-Eze North and Igbo-Eze South local government areas of the state and some of the plans also involve the Tricycle (Keke) and Motorcycle (Okada) Riders Associations in the two council areas who have made an open resolve that their members should stop operating from 6pm to 6am, daily in the affected two LGAs.

The two associations also directed all Keke and Okada operators to withdraw their services in Aguibeje and Iyionu communities in Igbo Eze North LGA till further notice.

The resolutions were taken during an emergency meeting of the Executives and Members of Keke and Okada riders associations in Igbo- Eze North and Igbo-Eze South LGAs, yesterday.

The associations requested all the security agencies in the state “to enforce these resolutions” and went further to enjoin their members in the affected LGAs and communities to comply strictly with the resolutions, forthwith.

This also comes as the Enugu State Government has opened up plans to step up surveillance against the spread of monkeypox in the 14 local government areas of the state.

The Executive Secretary of Primary Health Care Development Agency, Dr George Ugwu, made this known in an interview with the News Agency of Nigeria on Wednesday in Enugu.

He said that disease surveillance officers in council areas had been sensitised and placed on alert to detect monkeypox.

NAN reports that Monkeypox is a rare disease that is caused by infection with monkeypox virus. Monkeypox virus belongs to the Orthopoxvirus genus in the family Poxviridae.

”We have retrained our local disease surveillance officers on symptoms and signs to watch out for emerging and re-emerging diseases.

”Monkypox has not been detected in Enugu State; but we are not resting on our onus since we are a multi-bordered state.

“We have stepped up all perimeter of local disease surveillance against monkeypox, other emerging and re-emerging diseases in order to safe-guard the health of all in the state.

“However, we want our residents as well as individuals and families living in the state to up their personal and environmental hygiene and cleanliness levels.

“The issues of taking good care of one’s hygiene and observing those protocols of personnel and family hygiene as during the heat of COVID-19 especially that of regular hand washing and sanitising.

“Our people should also be careful on how they handle or touch home pets and animals since the disease is first transmitted from animal to human as well as infected human to another normal human”.

Ugwu noted that the agency, its affiliates and partners have also sharpened their response time to any suspected case of emerging and re-emerging diseases.

Facebook
Twitter
WhatsApp
Email
Telegram
Previous articleAhead Of 2023: The Reality, Ndigbo Must Come To Terms With
Next articleGroup Accuses INEC Of Taking Payment For PVC Registration