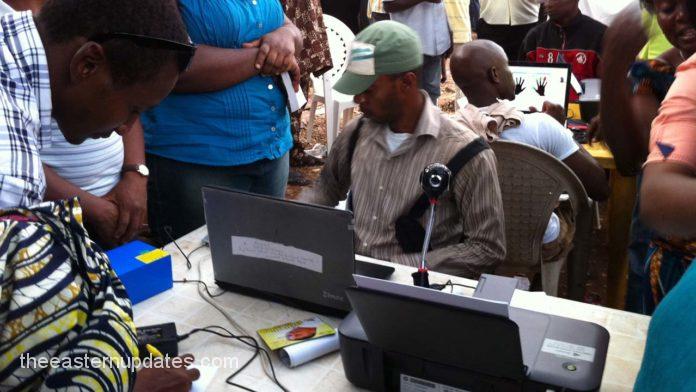 As preparations for the 2023 general elections take to a head, a rights group that has identified itself as the International Society for Civil Liberties and Rule of Law (Intersociety) has openly accused officials of the Independent National Electoral Commission (INEC) of charging some of the electorates in Anambra and collecting levies to register them in the Continuous Voter Registration (CVR) exercise for Permanent Voter Cards (PVC).

The group said this in a statement signed and circulated by its board of trustees chairman, Emeka Umeagbalasi and three others

It alleged that INEC officials were charging between ₦2,000- ₦5,000 from each registrant.

In the press statement titled: “INEC, Others Must Avoid Pushing Nigeria’s Millions o Revolutionary Voters Into ‘Street Revolution’’ the group said INEC was playing pranks with voters’ registration in Igbo and Christian areas and forcing massive disenfranchisement of the people.

Part of the statement read: “The Independent National Electoral Commission (INEC) and other critical stakeholders in Nigeria’s present electoral process must avoid pushing tens of millions of impoverished, disenchanted, suppressed and frustrated Nigerian youths and eligible voters into moving from ‘ballot revolution’ to ‘street revolution’ in the forthcoming 2023 General Elections.

“INEC and other critical stakeholders including leading political players and their parties must therefore come clean by doing the needful so as to avoid setting the country ablaze.

“Unlike in the past such as in 2011 and 2019 when some leading northern political players hid under radical religion(s) to organize and sponsor post-election mayhems targeted majorly at members of the Igbo ethnic nationality and their Trado-Judeo-Christian faith; INEC and other critical stakeholders in the country’s electoral process must inexcusably get it right this time around and in 2023 to avoid the explosion of the post-election tsunami of unquenchable proportions across the country.”

Umeagbalasi alleged that through the conspiracy of INEC, millions of eligible voters of old Eastern Nigeria and Midwest residents in the North-Central States of Plateau, Benue, Niger, FCT, Kogi and Nasarawa; Northeast States of Borno, Taraba, Adamawa, Bauchi, Gombe and Yobe; Northwest States of Kaduna, Sokoto, Kano, Jigawa and Kebbi; and Southwest states of Lagos and Ogun were denied and are still being denied demographic or registration and voting centre accessibility for them to be captured as voters and allowed to vote during elections.

The group said: “Checks from various registration centres across the country especially in the Igbo South- East and South-South, as well as Igbo and Christian, held areas in the North and South-West have continued to indicate that the Commission is at it again by playing pranks on the ongoing voters’ registration.

“Apart from massive disenfranchisement through shrinking constituency delineation exercise in recent past, especially in Igbo and Christian populated areas in the North and the South-West, acute shortage of registration machines and manpower especially in the named areas have been reported in the ongoing exercise with less than 22 days to go.

“Long queues of massive prospective voters involving hundreds of thousands, if not in their millions have dotted most of the registration centres in the South-East, South-South and Igbo/Christian held areas of the South-West and the North.

“Reverse is found to be the contrary in the Muslim held areas of the country where PVCs are issued to their owners including children of underage and illegal aliens by proxies including through village Heads.

“In several places monitored in Onitsha South, Onitsha North, Idemmili North, Ogbaru and Aguata in Anambra State, for instance, a price tag of between N2,000 and N5,000 is additionally imposed for getting to be registered. These are some of the commission’s undoing in its ongoing electoral midwifery capable of pushing millions of Nigerian youths/revolutionary voters from ‘Ballot Revolution’ to ‘Street Revolution.

“These, INEC must desist from continuing to do and must have them frontally redressed and put to an end to before it is too late.”

Debunking the allegation, the Anambra State INEC Resident Electoral Commissioner (REC), Dr Nkwachukwu Orji said, the Continuous Voters Registration exercise was free of charge, adding that the commission would be ready to work with the public to fish out and discipline any staff of the commission that engaged in extortion or any other form of misconduct during the exercise.