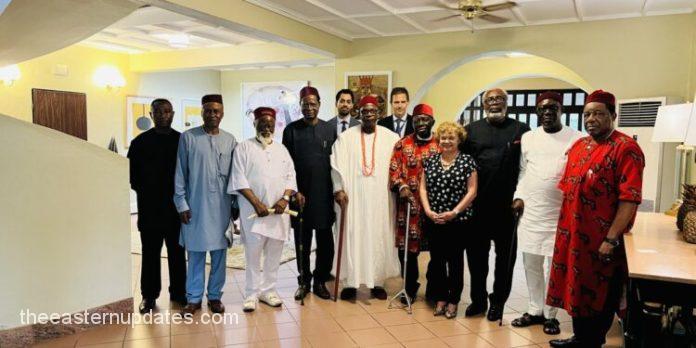 Bruce Fein, international counsel to leader of the Indigenous People of Biafra (IPOB), Nnamdi Kanu, has lashed out at the British High Commissioner to Nigeria, Catriona Laing, for meeting with the President General of Ohaneze Ndigbo, Prof. George Obiozor and other senior leaders from the South East, over Nigeria’s unity.

In a letter addressed to the High Commissioner, which was obtained by The Eastern Updates, Fein asserted that he was astonished over Laing’s May 12 tweet in which she expressed delight at meeting with the President General of Ohaneze Ndigbo and other senior leaders from the South East.

Fein queried Laing saying; ‘Why the delight or the meeting? Ambassador Obiozor is to Biafrans during their ongoing genocide by the Fulani what Lord Haw-Haw was to the British during the Nazi Blitz? Why would you meet with a quisling? Even more reprehensible was your tacit enthusiasm for a united Nigeria, indistinguishable from a suicide pact for Biafrans. As you know, Nigeria was artificially created by the United Kingdom (UK) at the point of machine guns in 1914.

‘Following its signature divide-and-conquer colonization policy, the UK forced the Biafran people, with a right to self-determination, against their will into a combustible mixture of incompatible ethnic groups under the umbrella of UK sovereignty.

The UK decamped in 1960 leaving Nigeria poised to explode like nitroglycerin. The 1967-1970 genocide of Biafrans, aided and abetted by the UK itself, was as predictable as Newton’s laws of motion.

‘Prior to compelled unification in 1914, the British negotiated treaties with Biafra. A jus cogens norm of international law endows the Biafran people with a right to self-determination against a Fulani-controlled Nigerian government that has notoriously excluded all Biafrans but a handful of bribable defectors from the corridors of power.’

He claimed no Fulani has ever been prosecuted and punished for murdering a Biafran in the history of Nigeria.

He said self-determination was at the apex of all internationally recognised human rights because it is a shield against oppression by the tyranny of the majority or the ruthless.

‘Instead of supporting a united, lawless, Nigeria confected by the British for ulterior motives, you should be advocating a United Kingdom suit against Nigeria in the International Court of Justice for denying the people of Biafra a self-determination referendum as required by Article I of the International Covenant on Civil and Political Rights and an infinite number of corresponding human rights treaties and resolutions. It is the least that the UK can do to atone for its egregious crimes and sins against the Biafran people that have persisted for more than a century. There is no statute of limitations on justice,’ Fein said.