HomeFeaturesIgbo Communities Appeal To Buhari To Release Kanu To Them
Features

Igbo Communities Appeal To Buhari To Release Kanu To Them 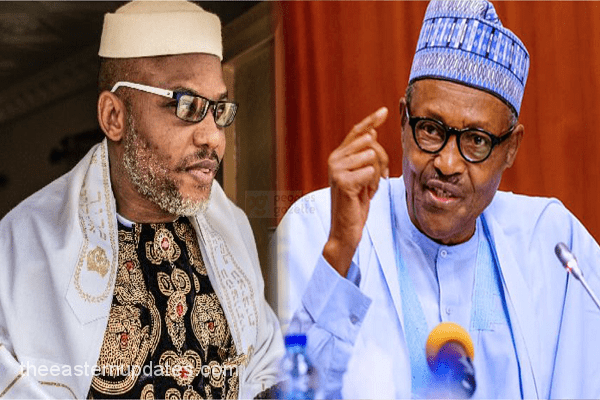 The Association of South East Town Unions, ASETU, also known as Igbo Town Unions, have pleaded with President Muhammadu Buhari to release the leader of the Indigenous People of Biafra (IPOB), to their custody, promising to produce him anytime he is needed and at anywhere.

They prayed President Buhari to forget the logic and legality of their request and rather consider their request, noting that Kanu’s continued detention has brought more insecurity to the country, particularly in their communities, than when he was free.

The Igbo communities cited instances such as in the Niger Delta and North East areas of where dialogue and compromise resolved problems of insecurity in the regions other than use of legalities.

ASETU made the plea in an open letter to President Buhari after an emergency Extra-Ordinary National Caucus meeting in Awka, Anambra State which was made available to The Eastern Updates.

The letter was signed by its National President, Chief Emeka Diwe; National Secretary, Gideon Adikwuru; Chairman, Board of Trustees, Dr. I. I. Onwubuya and presidents of the body in the five states of South East region.

Parts of the letter reads: ‘We utterly decry the worsening security situation in Igbo land and particularly, in parts of Imo and Anambra States.

‘ASETU and indeed Igbo in general are most grieved by the continued detention of Mazi Nnamdi Kanu, an action which has not helped the security situation in Igbo land and Nigeria but rather introduced the monstrous and retrogressive ‘sit-at-home’ with the attendant massive deterioration of security situation and debilitation of the South East economy.

‘The daily loss of innocent Igbo lives and the crippling of the South East economy occasioned by the monstrous ‘sit-at-home’ calls and worsening insecurity in Igbo land attributed to the continued detention of Mazi Nnamdi Kanu (as claimed) is not to the best interest of the country.

‘We passionately appeal to His Excellency, President Muhammadu Buhari to extend his milk of human kindness to Ndi Igbo in this most trying period and abate the continued loss of innocent souls and the destruction of the South East economy by applying a political solution and using his prerogative of Presidential Amnesty to release Mazi Nnamdi Kanu from detention. As the father of all, may we remind him of the Igbo adage that says: ‘if a father beats his child with the left hand, he draws him back with the right hand.’

‘Also, an axiom in criminal justice administration advocates that ‘it is better to release one hundred condemned criminals than punish one single innocent soul.’

‘The continued detention of one man (Nnamdi Kanu) has caused the death of so many innocent lives and destruction of properties worth billions of naira. If releasing him will stop the killings, and the sit at home orders as claimed, what do we lose by trying this option to save further lives and property. It is a costless benefit of doubt. We assure Mr. President that releasing him will not worsen the security situation, rather it will bring enduring peace and eliminate or reduce drastically the killings. Our leadership is grassroots based and we feel the heartbeat of the people more.

‘Let us not over-stretch the logic and legality of his ‘offence’ and resultant trial as that may gainlessly lead us to unending circles of justifications including the claimed primary cause of the anger of Igbo youths, which is the obvious and unwarranted marginalization of Ndigbo (which is indeed our collective agitation).

‘However, while we are not justifying his approach in pursuit of that cause, we are saying that in the interest of peace and the remaining lives of our people especially the youths (our future generation), let Nnamdi Kanu be released to us and let us talk thereafter. This is not the first time Nigeria is compromising logic and legality to achieve peace, except there is more to it. It was done in the Niger Delta in the case of Asari Dokubo and Co.

‘Also, confirmed Boko Haram killer terrorists and bandits who have murdered several innocent soldiers, Police, and thousands of other security agents and innocent civilians were said to have been pardoned, compensated with billions of Naira and placed on salaries above Level 15 civil servants; ironically but dangerously, they were recruited and absorbed into the same Nigerian Army they swore to wipe out!

‘We the Igbo Town Unions, the grassroots of the Igbo and to which every Igbo by birth is a member, most respectfully appeal to you to please release Mazi Nnamdi Kanu to us. As the closest administrative structure to the people in Igbo land, who feel the heart beat and know the pulse of the people, we know the incalculable damage Nnamdi Kanu’s continued detention is causing our people and the great reprieve his release would bring to Ndigbo in particular and Nigerians in general.’

The group appealed to all Igbo sons and daughters wherever they are domiciled to maintain peace and good neighbourliness as it await the President’s positive response to its passionate appeal.