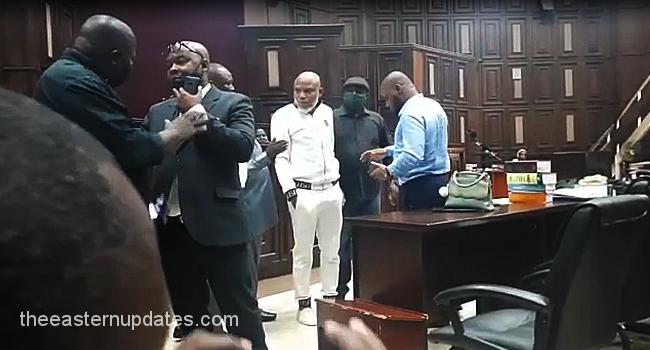 The family of the imprisoned Leader of the Indigenous People of Biafran, Mazi Nnamdi Kanu has decried the fact that they accused by former Governor of Abia State, Senator Theodore Orji representing Abia Central; his son and Speaker of the Abia House of Assembly, Rt. Hon. Chinedum Orji; the Deputy Governor, Sir Ude Oko Chukwu; and former Commissioner for Local Government and Chieftaincy Affairs, Chief Charles Ogbonnaya of being the main sponsors and orchestrators of insecurity in the state.

The family said nobody should be indicted for any crime “until thorough investigation and verifiable evidence are established.”

IPOB’s Media and Publicity Secretary, Emma Powerful, had in a statement, accused the above individuals of masterminding insecurity in the state, warning them to desist or be dealt with.

Kanu’s family who spoke through Kalunta Kanu, expressed surprise over the veracity of the intelligence that led to the conclusion.

The family said that their son currently in security custody would not appreciate the involvement of IPOB with matters outside the group’s core mandate which is the restoration of Biafra.

They asked politicians to settle their issues and leave IPOB alone.

In another development, soldiers of 14 Brigade Army Headquarters, Ohafia, Abia State, have reportedly killed gunmen suspected to be members of the Indigenous People of Biafra (IPOB).

The number of the IPOB suspects killed was, however, disputed. A source claimed four members of the outlawed organisation died in a shootout but another report said one pro-Biafra agitator was killed.
The Eastern Updates
Facebook
Twitter
WhatsApp
Email
Telegram
Previous articleABSU Loses Medical Accreditation, Ikpeazu Laments
Next articleAbia Prayers: CAN Announces Partnership With Kumuyi