HomeFeaturesFilling Station Burnt Down As Tanker Explodes In Anambra
Features

Filling Station Burnt Down As Tanker Explodes In Anambra 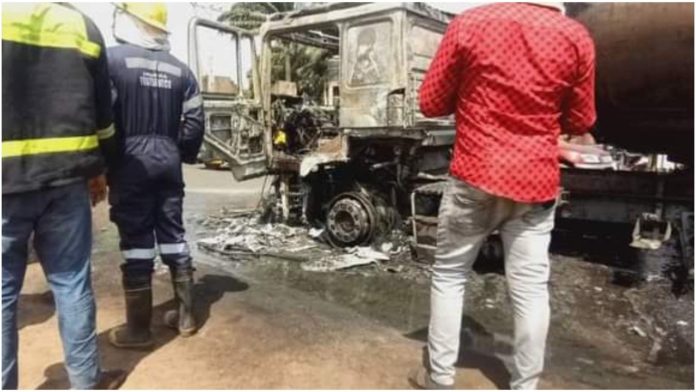 A petrol tanker dispensing petrol on Friday caught fire in Ogidi, near Onitsha, Anambra State razing down a filling station in the process.

A source who spoke to The Eastern Updates narrated that; ‘There was pandemonium in the entire area in Ogidi, near Onitsha. The petrol tanker was discharging fuel at the filling station, when a small spark of fire was noticed, and before it could be extinguished, the tanker was already in flame, burning down the filling station’.

He said: ‘At about 09:53am of today (Friday), we received a distress call of a fire outbreak at a petrol filling Station at 7th Mile, Ogidi.

‘Our fire trucks and firefighters were deployed to the fire incident scene. Anambra State Fire Service, Awka, Nigeria and Federal Fire Service were there to fight the fire. The fire had been completely controlled and extinguished now.

‘There was no loss of life while the filling station was saved. The fire affected the tanker. The cause of the fire outbreak was as a result of spark from the pumping ground during their transloading process.

‘We will continue to tell petrol filling station owners to stop discharging and transloading under the intensity of the sun or during the day. This practice is best done in the night or at the early hours of the morning,’ Agbili said.