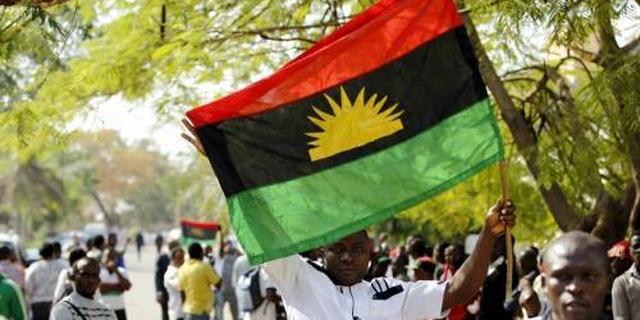 Indigenous People of Biafra (IPOB), have clarified that the ongoing sit-at-home order currently being observed in the South East was never an order from its leader, Nnamdi Kanu.

The group spoke in support of a statement credited to Senator Enyinnaya Abaribe that in a meeting with Kanu, the IPOB leader denied ordering the sit-at-home.

Abaribe had disclosed a few days ago that Kanu denied issuing the order during a meeting that also had  former Deputy Senate President, Ike Ekweremadu and two bishops, held at the Department of State Services (DSS) headquarters in Abuja.

IPOB’s Media and Publicity Secretary, Emma Powerful, in a statement said: ‘It is true, statement from Abaribe, because we stated it before that Kanu, through his lawyers, had asked IPOB members and leadership, precisely, the DOS, to stop Monday sit-at-home order.

‘Those enforcing the non-existent Monday sit-at-home order killing and burning down properties belonging to Biafrans will incur the wrath of IPOB in due cause.

‘We are watching them because soon, their cups will be full and overflow. If you know you are truly for Biafra freedom don’t fall into the traps of these liars and deceivers because the truth will soon emerge.

‘They will soon regret their actions because they are not IPOB members and don’t know or understand what IPOB is capable of doing. They must regret what they are doing in our land. Their actions are detestable both to God and to man. Such people have nothing in common with IPOB.

‘This recent statement from Abaribe has vindicated our legal team and DOS that obliged the information from our lawyers who indicated how our leader, Kanu, instructed us to stop Monday sit-at-home.

‘Those in America and some parts of Europe, issuing fake orders to blackmail IPOB and its operational leadership that the lawyers lied should be ready to embrace what is to come against them. It is better everybody hears Abaribe, but those claiming to be Kanu disciples and using it to change IPOB strategy will regret their actions.

‘Again, it has come to the knowledge of IPOB that they are now peddling lies against IPOB and our leader that he sidetracked the people of Ebonyi State in the leadership of IPOB. Such tissue of lies do not merit any response as doing so will amount to dignifying it.’

The Eastern Updates reports that the Sit-at-home order which was declared by the secessionist group has always grounded activities in the Eastern region over the last 6 months.