Five Persons Escape Death From A Road Accident In Awka 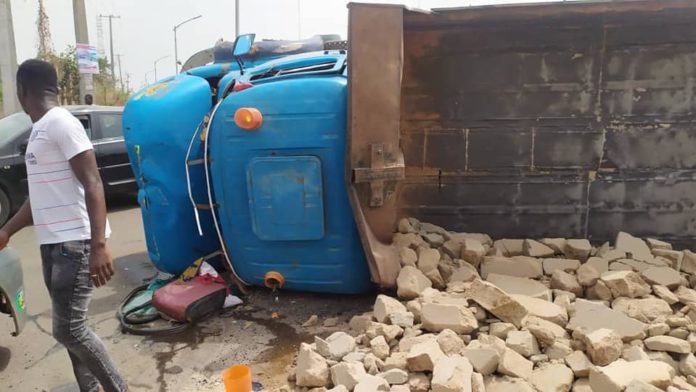 An accident that occurred at Dr. Alex Ekwueme’s Square Crossroad this afternoon has injured five persons.
The road mishap had also destroyed three hundred blocks worth thousands of naira as well as the vehicles involved in the crash.
Read Also: Gospel Singer Gozie Okeke survives ghastly motor accident
According to an eyewitness, Miss Chinyere Nwaoyibo who sells fruits along the road, the accident involving a private SUV and a heavy-duty vehicle was caused by reckless driving on the part of the driver of the SUV who was in high speed to overtake the heavy-duty vehicle heading to the Federal Secretariat road, even as she regretted that all her goods were lost to the incident.
The driver of the heavy-duty vehicle loaded with blocks escaped alive with bruises, while the SUV driver is on the run as at the time of this report.
The victims of the accident who sustained injuries have been taken to Chukwuemeka Odumegwu Ojukwu University Teaching Hospital, Amaku, Awka.