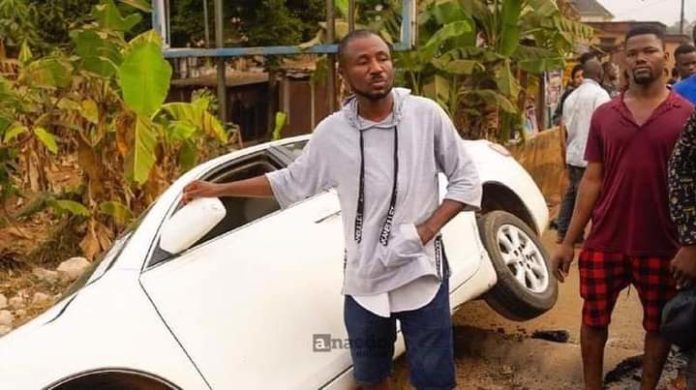 Popular Gospel Singer, Gozie Okeke was on Tuesday involved in a terrible road accident along the Nnewi-Nnobi road.

Speaking to newsmen in an interview at the scene of the accident, Prince Gozie Okeke said ‘if not for God, his life would have been cut short this morning. it was indeed a miracle’

‘I and my friend were on our way from Nnobi to Nnewi, on getting close, we never knew there was a bump along the road, suddenly we saw drones since it is still in the early morning (6:am), the vision is not too clear while trying to dodge the drone, we saw the bumps and while still struggling to control the car, we fell into the gutter.

‘I was sitting in front (passengers side) and residents confirmed that there have been series of accidents, and even while we are here, a couple of accidents from okada riders have happened’.

The driver of the vehicle, Ambassador Ebubedike in an interview said ‘it is unfortunate that we didn’t see the bumps, and in the cause of trying to dodge the drones, I suddenly drove into it. Thank God we survived without any injuries.

‘The youths out of anger destroyed the road bumps in protest.’ Their anger was that there were no signs indicating bumps ahead. Road users should have been informed ahead of time over plans to put bumps.

One of the Eyewitness Mr. Onyeka Okonkwo in an interview said ‘this is not the only accident recorded, several okada riders have fall victims since last night, a Keke driver falls into the gutter. A lot of people are not happy. There are no signs that there is a bump, which is not supposed. Before now, there has not been an accident recorded in this location’.

Mr. Okonkwo suggested that if a bump must be put in place, it shouldn’t be too high.