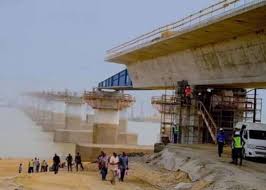 The Southeast stakeholders of the All Progressives Congress (APC) and Ohanaeze Ndigbo have commended President Muhammadu Buhari for the level of job and funding of the Second Niger Bridge project.

The stakeholders, who were led on inspection to the site of the bridge by Imo State governor and leader of the APC in the zone, Senator Hope Uzodimma, described the project as ‘promise made, promise kept’ by the federal government.

The President-General of Ohanaeze Ndigbo, Prof. George Obiozor who led other national executive members and chairmen of the group in the Southeast states, expressed happiness and satisfaction on the level of the job done so far. It, however, urged the President to keep to his promise of delivering the job next year and inaugurating it.

The ministers in their separate speeches thanked President Buhari for keeping to his promise of embarking on the project which they said is about to be completed. They said that it was love that the president has for Ndigbo that made him continue to fund the project despite the world economic crunch caused by the Coronavirus pandemic.

They said that the project when completed, will impact the economy of the nation at large, and the Southeast zone, in particular, because of the importance of the bridge to both the north and south of the country.

The ministers were optimistic that the project would be inaugurated by 2022, as stipulated by the contractor, saying that the completion of the project would shame those who said Buhari doesn’t love Ndigbo. They further said that apart from the bridge many roads were on-going and about to be completed, including the Enugu-Onitsha expressway.

While receiving the stakeholders, the Project Director of Julius Berger, Mr. Wiser said that they have done 55 percent of the project, adding that they had engaged 1,600 people locally for direct labour while the total number of people working on the site is estimated at over 30, 000. He assured of delivering the job by the stipulated period of 2022 as long as the federal government continues to sustain the funding.