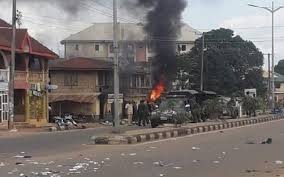 The attack occurred Thursday afternoon. Eastern Updates gathered that the attackers set ablaze the left-wing of the Police Division and four patrol vehicles belonging to the police.
Police Public Relations Officer (PPRO) for Ebonyi Command, DSP Loveth Odah, who confirmed the incident in a statement Thursday night said the IPOB members claimed that police in the area were protecting Fulani herdsmen who allegedly killed one of their members.

‘This followed threats by the proscribed group who are alleging that the police were protecting the Fulani herdsmen who they accused of being responsible for the killing of one of their members, Nwite Njoku ‘m’. One policeman sustained machete cuts injuries during the attack and he is responding to treatment in the hospital.’

Meanwhile, the state Commissioner of Police, Aliyu Garba, has done on the spot assessment tour of the area and met with the stakeholders in the community to seek their support in carrying out the investigation on the matter.

‘The CP while assuring the general public, particularly the residents of the State of his continued commitment to the protection of lives and properties, urges all to remain law-abiding as normalcy has totally returned to the area’, Odah said.

In its reaction, IPOB has denied involvement in the said attack. Media and Publicity Secretary of the group, Emma Powerful said its members still stick to the main objectives of the struggle by remaining non-violent.
‘ESN cannot engage in such violence, our objective is to protect the women against the Fulani herdsmen and other criminality in the southeast, we would never degenerate to violence’, Powerful submitted.