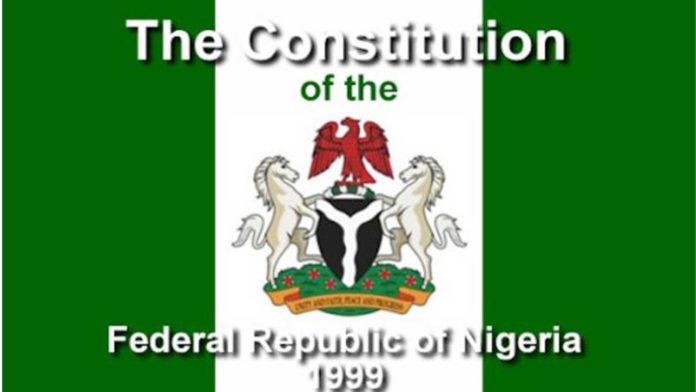 Leaders from various ethnic groups in the South-East, South-South, South-West and Middle Belt regions of Nigeria have given a 90-day ultimatum to the Nigerian government to raise a panel on sovereign national conference to decide on the revocation of the 1999 Constitution or to dissolve the 1914 amalgamation of Nigeria.

The leaders said that the 1999 Constitution is a fraud put together to continuously subjugate other nationalities under Fulani hegemony.

According to a statement released on Friday, the leaders under the aegis, Nigerian Indigenous Nationalities Alliance for Self-Determination made the decision at a meeting in Lagos.

Read Also: Why The Nigerian Constitution Must Be Reviewed, Reamended

They noted that the 1999 constitution was the cause of the broad insecurity and penury in Nigeria.

Others were Dr Kunle Oshodi; Ambassador Godknows Igali; Air Commodore Indongesit Nkanga (retd.) and Rear Admiral Geoffrey Yange.
The leaders collectively demanded that all elections in Nigeria be put on hold so that winners would not be sworn in based on the defective 1999 Constitution.

‘Being confronted by the clear and present danger of extermination in the hands of our supposed compatriots in the union of Nigeria, (we) hereby declare a sovereignty dispute with the federation of Nigeria as represented by the Federal Government of Nigeria, on account of our repudiation and rejection of the imposed 1999 Constitution of Nigeria, whose authorship was fraudulently imputed to us,’ the statement said.

‘Furthermore, effective from today, 18th December, 2020, (we) give a 90-day notice to the Government of the Federation of Nigeria, the Security Council of the United Nations, the Government of the United States of America, the European Union as well as the international community, of the intention of the peoples of the alliance territories to reconsider our continued allegiance to the disputed 1999 Constitution as well as the unitary union of death, attrition and backwardness it foists on us.’

‘A formal announcement by the Federal Government of Nigeria acknowledging the constitutional grievances and sovereignty dispute now declared by the peoples of the South and MIDDLE-Belt of Nigeria.’

‘A formal initiation of a time-bound transitioning process to engender the emergence of fresh constitutional protocols by a two-stage process in which the constituent regional blocs will, at the first stage, distill and ratify their various constitutions by referendums and plebiscite and in the second stage, negotiate the terms of federating afresh as may be dictated by the outcomes of a referendum and plebiscite.’