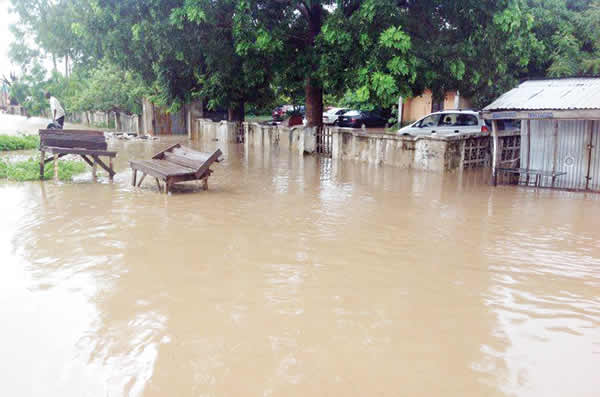 A major flooding has rendered no fewer than 1,000 persons homeless in four communities in the Ogbaru Local Government Area of Anambra State.

The Transition Committee Chairman of the council, Mr Arinze Awogu, confirmed the incident to newsmen in Awka on Monday.

Awogu said the flood submerged many farmlands in the area.

He told the Newsmen that the displaced families had relocated upland, due to the steady rise in the water level.

He said that the victims had yet to go into the Displaced Persons Holding Camp but taking refuge in the homes of their relatives.

He said that the crops had either been washed away or got rotten in the affected farmlands.

The council boss advised the victims to urgently move into the camps rather than wait until the disaster would get worse.

He said, ‘Ogbaru is gradually but steadily going under water, our farms have been submerged, especially the root crops.’

‘At least 1,000 persons were displaced from their homes and some victims decided to join their relatives upland, refusing to go to the holding camps.’

‘We are afraid that by next week, the situation would get worse. You know we are riverine and our occupation is agriculture.’

Awogu said that streams in the area, which emptied into River Niger had started flowing backwards and had turned white in colour.

He described the situation as ‘a clear indication that the river level had risen and flowing into the communities.’