Problem With The Persistent Ohu, Osu Caste System In Igboland 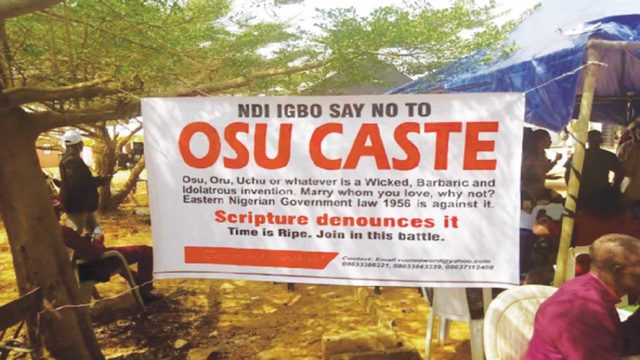 In a tragedy reminiscent of Romeo and Juliet, a couple in Nigeria killed themselves earlier this month after their parents had forbidden them from marrying because one of them was a descendant of slaves.

‘They’re saying we can’t get married… all because of an ancient belief,’ the note they left behind said.’

The lovers, who were in their early thirties, hailed from Okija in south-eastern Anambra state, where slavery was officially abolished in the early 1900s, as in the rest of the country, by the UK, Nigeria’s colonial ruler at the time.

But descendants of freed slaves among the Igbo ethnic group still inherit the status of their ancestors and they are forbidden by local culture from marrying those Igbos seen as ‘freeborn’.

‘God created everyone equally so why would human beings discriminate just because of the ignorance of our forefathers,’ the couple said.

Many Igbo couples come across such unexpected discrimination.

Three years ago Favour, 35, who prefers not to use her surname, was preparing for her wedding to a man she had dated for five years, when his Igbo family discovered that she was the descendant of a slave.

“They told their son that they didn’t want anything to do with me,” said Favour, who is also Igbo.

At first, her fiancé was defiant, but the pressure from his parents and siblings soon wore him down and he ended their romance.

Marriage is not the only barrier slave descendants face.

They are also banned from traditional leadership positions and elite groups, and often prevented from running for political office and representing their communities in parliament.

However, they are not hindered from education or economic advancement.

The ostracism often pushed them to more quickly embrace the Christianity and formal education brought by missionaries, at a time when other locals were still suspicious of the foreigners.

Some slave descendants are today among the most prosperous in their communities, but no matter how much they achieve, they are still treated as inferior.

In 2017, 44-year-old Oge Maduagwu founded the Initiative for the Eradication of Traditional and Cultural Stigmatisation in our Society (Ifetacsios).

For the past three years, she has been travelling across the five states of south-eastern Nigeria, advocating equal rights for descendants of slaves.

“The kind of suffering that the black people are going through in America, the slave descendants here are also going through the same,” she said.

Ms Maduagwu is not a slave descendant, but she observed the inequality while growing up in Imo state and was moved to tackle it after watching the devastation of her close friend who was prevented from marrying a slave descendant.

During her trips, Ms Maduagwu meets separately traditional persons of influence and slave descendants, then mediates dialogue sessions between the two groups.

“Men sat down to make these rules,” she said. “We can also sit down and remake the rules.”

Descendants of slaves among the Igbo fall into two main categories – the ohu and the osu.

“Osu is worse than slavery,” said Ugo Nwokeji, a professor of African studies at the University of California, Berkeley, who thinks the osu were wrongly classified as slaves by the missionaries.

“Slaves could transcend slavery and became slave masters themselves but the osu for generations unborn could never transcend that.”

Discrimination against the osu does tend to be worse.

While the ohu are marginalised as outsiders – with no known places of origin or ageless ties to the lands where their ancestors were brought as slaves – breaking taboos about relations with the osu is accompanied, not just by fear of social stigma, but of punishment by the gods who supposedly own them.

Favour’s fiancé was told by his father that his life would be cut short if he married her, an osu.

“They instilled fear in him,” she said. “He asked me if I wanted him to die.”

Such fears have made it difficult to enforce laws against discrimination which exist in the Nigerian constitution, plus a 1956 law by Igbo lawmakers specifically banning discrimination against ohu or osu.

“Legal proscriptions are not enough to abolish certain primordial customs,” said Anthony Obinna, an Catholic archbishop in Imo state, who advocates for an end to the discrimination. “You need more grassroots engagement.

In her advocacy, Ms Maduagwu educates people on the various ways in which traditional guidelines on relating with the osu have been breached, “without the gods wreaking any havoc”.

“Today, we are tenants in their houses, we are on their payroll, we go to borrow money from them,” she said.

Such association with the osu would have been unthinkable in the past.

No official data exists on the number of slave descendants in south-eastern Nigeria.

People tend to hide their status, although this is impossible in smaller communities where everyone’s lineage is known. Some communities have only ohu or osu, while some have both.

In recent years, increasing agitation from ohu and osu has led to conflict and unrest in many communities.

Some slave descendants have started parallel societies with their own leadership and elite groups.

About 13 years ago, the osu in Imo state formed a group called Nneji, which means “from the same womb”.

Among the benefits that Nneji offers its thousands of members is arranging marriages between their adult children in different parts of the world, saving them the potential heartbreak of relationships with “freeborn”.

“People come to you when they want a favour from you,” said Ogadinma, a septuagenarian from a wealthy osu family, whose husband is a patron of the Nneji.

“But those same people, when your children want to marry their children, they complain that the person is osu.”

Archbishop Obinna, who has been criticised for officiating at the weddings of what he describes as “mixed couples”, said: “I have had to safeguard some of the couples from the violence of their parents and relatives.”

Ogadinma, who also asked me not to use her surname to protect her family, faced discrimination when she ran for political office about 10 years ago.

Petitions poured in from people who said that she was “unsuitable” to contest – and the national leader of her party, who was Yoruba, found it difficult to support her, convinced that she stood no chance.

“He told me plainly: ‘There is something Igbo people say that you are, which will not allow your people to vote for you.'”

Discrimination based on slave caste is not common among the Yoruba or Hausa, Nigeria’s two other major ethnic groups. But it has been reported among some ethnic groups in other West African countries, such as Mali and Senegal.

Ms Maduagwu’s Ifetacsios group now has four staff and about a dozen volunteers. The work has been slow and hard, but a handful of traditional rulers have embarked on the process of abolishing the inequality in their communities.

She says she was initially shocked by the attacks on social media from people opposed to her activism.

“I had to join a lot of Igbo groups to spread the message and a lot of them insulted me and told me that their tradition will remain.”

Such attitudes even among the educated and enlightened are perpetuated by African literature such as late Nigerian writer Chinua Achebe’s Things Fall Apart, Ogadinma believes.

“He was a person dedicated to a god, a thing set apart – a taboo for ever, and his children after him,” Achebe, who was Igbo, wrote of the osu in his 1958 classic.

“He could neither marry nor be married by the freeborn… An osu could not attend an assembly of the freeborn, and they, in turn, could not shelter under his roof… When he died he was buried by his kind in the Evil Forest.”

Ogadinma worries that Nigerian students around the world who read the novel as part of their curriculum subconsciously adopt traditional beliefs about the osu.

“If every generation of Nigerian children is reading about this osu, don’t you think it will affect their thinking?” she said.

Nollywood also plays a part, according to Aloysius Agbo, an Anglican bishop in Enugu state, who advocates for an end to the discrimination.

Nigerian films have their dedicated TV channels, including the wildly popular Africa Magic.

“Beliefs that we already accepted as superstitious are now coming back as real truths because of what we watch on Africa Magic,” said Bishop Agbo. “They do it as showcasing our culture but they are not conscious of the impact on society.”

But with the recent Black Lives Matter (BLM) protests around the world, Ms Maduagwu hopes that more Igbo people will be inspired to change their attitudes.

“If more people will reflect that the agonising journey of the black Americans began here, the BLM protests will affect our work positively,” Ms Maduagwu said.

“Africans need to look inwardly to see what is happening in their homeland.”

Happy Birthday To A Gem At 57