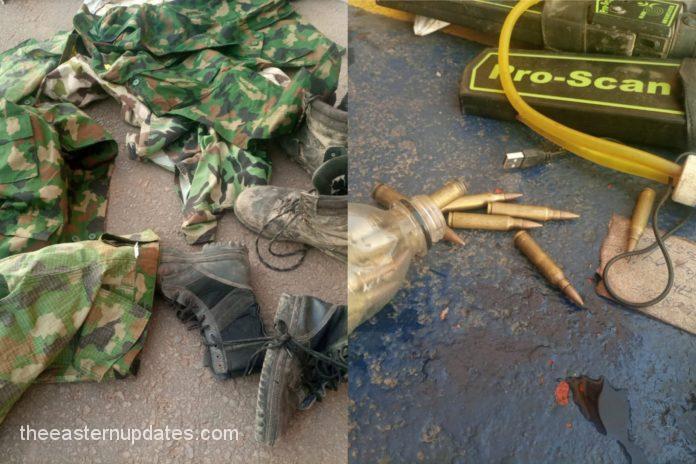 A joint-security operation in Ebonyi State has resulted in the arrest of a suspected Commander of the Indigenous People of Biafra (IPOB), one Nnamdi Obaji, including other accomplices.

The Police said the suspected IPOB members were arrested in their camps in a thick forest, in Omege village, Agba community, in the Ishielu Local Government Area of the state.

The suspects were allegedly responsible for some criminal activities in the community and its environs in recent times.

The Police Public Relations Officer, in the state, SP Chris Anyanwu, revealed this in a statement, on Sunday.

Revealing how the arrest was made, he said, ‘In a bid to rid the state of crime and criminality, especially as the yuletide and political seasons set in, the Ebonyi State Police Command, under the leadership of CP Aliyu Garba, got credible intelligence, and stormed three big camps of the outlawed IPOB/ESN operatives (including a new one under active construction), located in a thick forest close to Opeke River, in Omege village Agba Community, of Ishielu LGA.

‘The operation, which was spearheaded by the Command’s tactical teams and assisted by the military and DSS in the state, relied on evidence, professionally gathered from interrogation of Nnamdi Ngwuta Obaji (aka State Commander No.3) and another operative of the outlawed group, Felix Ogudu who were earlier arrested’.

He said while accessing and cordoning the camps, the combined teams were ambushed by the criminal elements with rains of sporadic shooting in their direction.

‘Without hesitation, the team swiftly responded and engaged them in battle and of course our superior fire power subdued the miscreants, who chanted morale-boasting war songs, dived into the Opeke River and swarm to different directions as they scampered for safety. However, a good number of them were neutralized while many escaped with bullet injuries’.

The Police spokesman said further, ‘After dislodging the criminal elements and taking over the ground, the camp which they christened “Igbo But Igbo Training Camp”, was ransacked and destroyed. Equally, a wooden bridge under construction intended to aid the miscreants in their coming or leaving the camp, was dismantled.’

It also added, ‘Not yet done, the joint team carried the onslaught to Anike Isu, Onicha LGA, the abode and shrine of the dare-devil State Commander of the organisation popularly called Ambassador.

‘The shrine which had a live-tortoise, was equally neutralised at the end of the assignment.

‘One of the leaders of the organisation popularly known as SARS Commander with dread-locks on his head, said to be an indigene of Cross River State is on-the-run and is declared wanted. He and members of the outlawed IPOB/ESN are responsible for the attack on Police stations, home town of former Chairman Ikwo LGA.

‘The gang is highly suspected to have partaken as a crimini participe in the attack of the Provost of Federal College of Education, Isu Onicha along Agba axis, a few days ago judging from the proximity of their camp to the scene of the incident and many other similar ones in the state’.