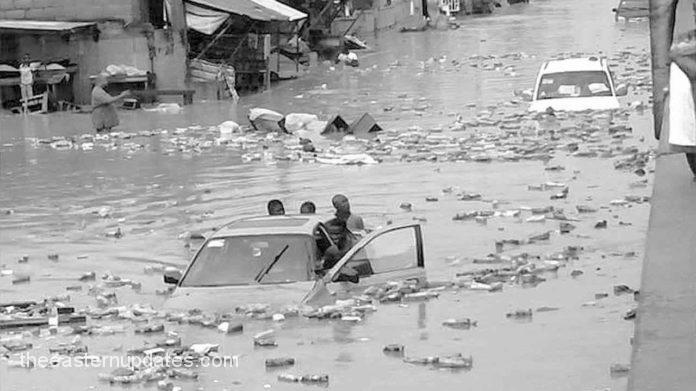 The Eastern Updates reports that Anambra is one of the worst affected states in this year’s flood disaster with many lives lost so far, and communities submerged in water while properties worth hundreds of millions of Naira were damaged.

However, the President General of the community, Johnny Metchie, said the government had not shown presence in coming to rescue the community over the disaster.

Metchie who has been visiting different camps and donating relief material across the IDP camps set up by the state government expressed fears that there may soon be a serious outbreak of some diseases in the IDPs camps because of the unprofessional ways things were being managed, including food, medicine and other items being donated by well-meaning individuals and organizations.

Metchie who was recently appointed the African Director of the International Association of World Peace Advocates lamented that what he saw in the IDP camps in Umuleri, Aguleri and the entire state was far below what was acceptable anywhere in the world.

According to him, rather than NEMA and SEMA, the Anambra flood victims’ IDPs camps were put entirely in the hands of new Local Government council chairmen who, apart from not having any experience in disaster management, were not even engaging the services of experts, including health officials, nurses, medical doctors and others, to ensure that essential food and drugs are safe for the victims.

He said, ‘I have been going around the different IDP camps in Anambra State. While I commend the efforts of the state government led by Prof. Chukwuma Soludo in quickly responding to the needs of the victims by setting up IDP camps, I cannot but express disappointment with the total absence of federal agencies like NEMA, as well as SEMA which would have brought in some level of professionalism in the operations.

“It falls below all known standards of disaster management to leave the coordination in the hands of local government chairmen who have no requisite knowledge and expertise to coordinate such huge crisis as we have on our hands currently.

“In cases where NEMA is involved, they come with health officials, nurses, medical doctors, security and others. This is to ensure that victims are not given expired and other unwholesome drugs. Victims that are put in IDP camps need security to ensure that they are not attacked or even robbed of the food and other relief items being donated by well-meaning individuals and organization.

‘So, why has NEMA, a federal government agency abandoned Anambra at this critical time?

‘There is also the need for accountability in order to ensure that donated relief materials are not diverted.’

While appreciating the Anambra state government, individuals, NGOs, churches and other organizations that have been donating relief materials to the IDPs, Metchie called for more efforts in the areas of mattresses, blankets, mosquito nets, and rechargeable lamps, as well as mobilisation of nurses, doctors, and other health officials to the camps.