HomeFeaturesHawkers, Others Escape Death As Tanker Falls In Anambra
Features 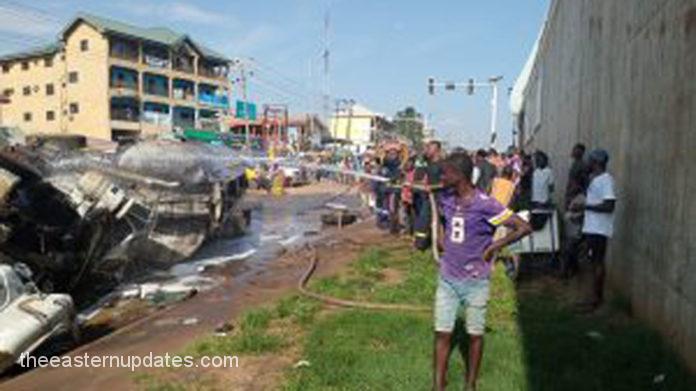 There was palpable tension yesterday at Aroma junction Awka, Anambra capital after a tanker carrying a substance suspected to be inflammable fell and began to spill its content.

The Eastern Updates reports that the incident caused passengers, drivers, hawkers, and others around the place to scamper for safety.

Many people were seen running towards the state secretariat road, some Ifite road while others ran towards the Eke Awka and Government House road direction due to the fear that the substance might catch fire.

However, a few minutes later, the driver of the truck, Mr Kingsley Ogu, miraculous came out from the vehicle and explained that he was carrying palm kernel oil used for soap making and not petroleum product.

Ogu who said he was coming from Amansea axis of Enugu/Onitsha Expressway to Onitsha, said he was trying to avoid hitting a bus with Anambra government registration number when he veered off the road.

‘As I tried to avoid the bus, my tyres accidentally climbed the pavement by the road and suddenly resulted to the truck falling down,’ he said.

Ogu said that his truck was carrying 33, 000 litres of palm kernel oil for industrial use and was heading to Onitsha.
An eyewitness said that the driver with the registration number: Anambra UKP 771 YA was avoiding to hit an 18 seater bus carrying a team of Anambra State Revenue taskforce patrol team when the accident occurred.

‘The driver of the truck had struggled to control the vehicle in vain after the bus delayed in leaving his way as he descended the road which is a bit sloppy”, the source who simply identified himself as Chinedu said.

The Eastern Updates reports that less than 15 minutes after the incident, team of firefighters from the state arrived the scene and began to pour water on the substance which spilled on the road and spread towards Dr Alex Ekwueme Square, Awka.

One of the firefighters sighted at the scene said it was their Director that would speak on the matter as they were still busy with the work.