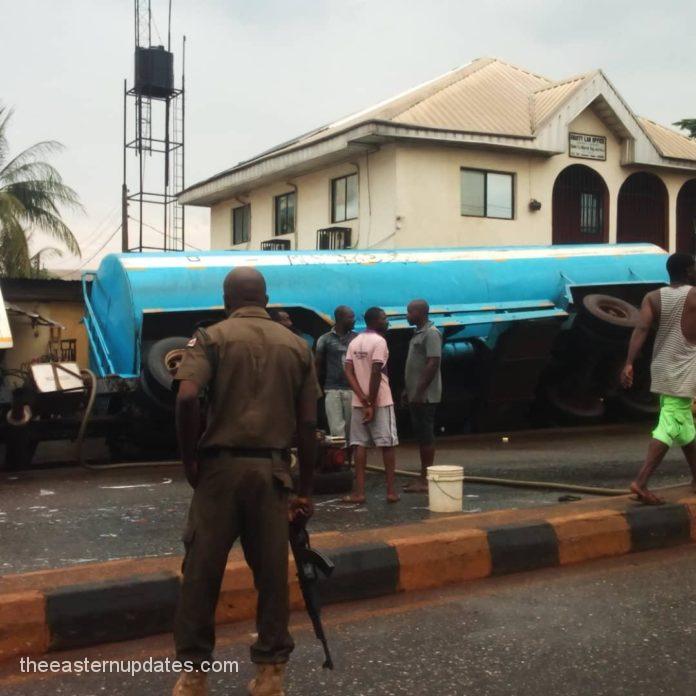 A tanker conveying cooking gas leaked its contents into the Onitsha-Awka Road near the New Tarzan neighbourhood in Nkpor, Anambra State, causing chaos.

Although the tanker’s registration number could not be seen, it bears the following inscription: (Takl-183).

The construction, which is claimed to have begun around 10 am, resulting in significant traffic on the already congested route because the area was cordoned off and cars were not allowed to get any closer in order to prevent a fire outbreak.

Vehicles going in and out of Onitsha that were caught up around the area stood on a standstill for several hours while men of the fire service were on standby to forestall any fire incident.

Commuters and passengers going in and out of Onitsha alighted from vehicles and started trekking away from the scene of the incident.

The development caused serious chaotic traffic situation as motorists were advised to use alternative routes, even as the routes became almost impassable.

The Anambra State Sector Commander, Federal Road Safety Corps, Adeoye Irelewuyi, while confirming the incident in a statement, said, ‘Motorists are advised to use alternative routes from Awka, enter the road at Nkwelle Junction to burst out at 33 to GRA or Nkpor to burst out at Boromeo roundabout and to Onitsha.’

The men of the FRSC personnel from the RS5.3 Nteje Unit Command, who visited the scene said the road was completely blocked preventing vehicular movement from both lanes to avoid sudden fire out break.

‘The incident happened at a location called ‘Sister’ which is between the Building Materials and Tarzan Junction where our traffic control personnel are controlling traffic and also observing the suitation.

‘The driver of the tanker was carrying cooking gas which started leaking and decided to park the truck at that location.

‘Meanwhile, the gas vapour is still leaking as of this time, but the fire service personnel are also on the ground neutralising the area.

‘Vehicles other than tankers and trailers diverted from toll gate drove against traffic to the Building Material Junction towards Ogbunike to Old Road,‘ the FRSC officials said.