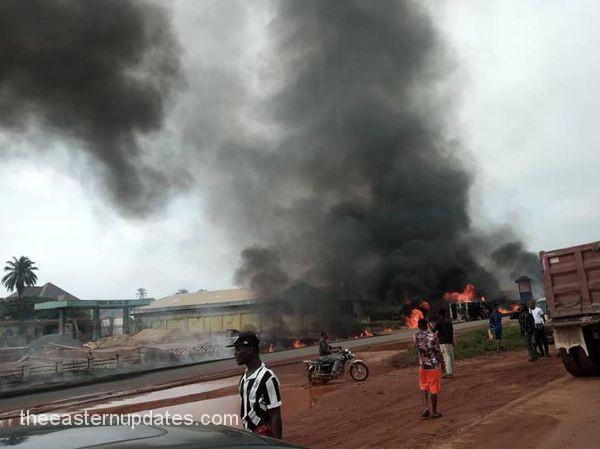 No fewer than two persons were burnt beyond recognition at Odumodu Umunya, along Onitsha – Expressway in Anambra State on Tuesday following an explosion.

According to an eyewitness who spoke to The Eastern Updates, the tyre of a tanker loaded with gas burst and it resulted in a collision with a shuttle bus. Hence, the accident caused the fire explosion at Odumodu Umunya, Oyi Local Government Area of Anambra State.

According to him, the incident was caused by a tanker’s tyre that burst and it resulted in a collision with a shuttle bus that led to the fire explosion.

‘We received a distress call at about 0840hours (8:40 am) on Tuesday 24th May 2022 that a tanker loaded with gas had a burst tyre which resulted in a collision with a shuttle bus that caused the fire explosion at Odumodu Umunya.

‘We immediately deployed our firemen to move down to the fire incident scene to extinguish the fire. According to the eyewitnesses and what we could confirm, two people were burnt to death.

‘The fire was completely extinguished and no other casualties were recorded during the fire fighting. We left the fire incident scene at about 1130 hours (11:30 am)’ he said.

The Eastern Updates reports that this ugly incident joins a long list of explosions in the South East which has resulted to several untimely deaths.