HomeFeaturesArmy To Commence Shooting Exercise In Imo By Sept 5
Features

Army To Commence Shooting Exercise In Imo By Sept 5 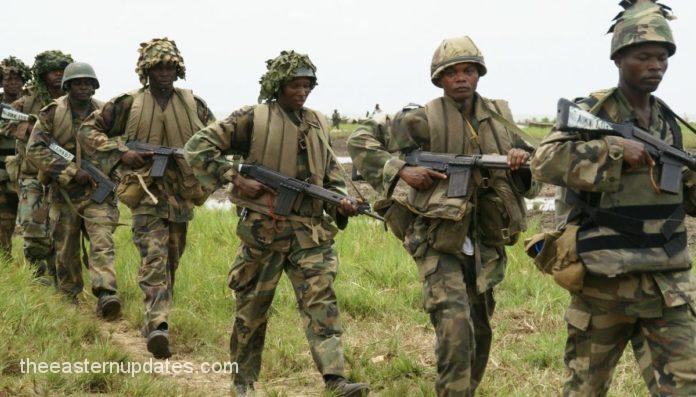 The Nigerian Army in Imo State has made an open announcement to some of the Imo residents to make sure that they keep off the range area for its Range Classification Exercise which had been slated for September 5-9.

This is contained in a release by the Assistant Director, Army Public Relations, 34 Artillery Brigade of the Nigerian Army, Obinze, Owerri, Imo State, Capt. Joseph Akubo on Saturday.

Akubo said that the exercise was an annual event involving the use of arms and live ammunition, thus the need for the civilian public to stay away from the range area.

“The Range Classification Exercise is an annual event of the Nigerian Army aimed at testing personnel effectiveness in weapon handling and firing efficiency. It is an annual event which involves the use of arms and live ammunition.

“I am directed to inform you that 34 Artillery Brigade will commence this year’s Annual Range Classification Exercise from 5-9 September 2022 at the Small Arms Shooting Range, Obinze Barracks.

“The exercise will be conducted from 6 am – 6 pm daily throughout the stipulated period.

“In view of the above, the people of Obinze Town and surrounding communities are strongly advised to keep away from the Range Area throughout the mentioned period,” he said.

In another report, some of the Officers of the Nigerian Army while enforcing curfew which had been imposed on the people of Igbo-Eze North Local Government Area of Enugu State by the Enugu state government have allegedly dehumanised and intimidated a Town Union President of Imufu community, Lawrence Mamah, in the council area.

Mamah, who has been identified as a retired Deputy Superintendent of Police told Newmsne that his problem had started when a yet-to-be-identified Army Major commanding the troops enforcing the curfew invited him to his office to demand for the list of members of the Indigenous People of Biafra, IPoB, and Eastern Security Network, ESN, allegedly operating in his area.

He also informed Newsmen that when he told the army officer that he had no knowledge of the operation of the above-mentioned groups in his area, he allegedly started brutalising him, hitting him with bench and tied his hands like a common criminal.