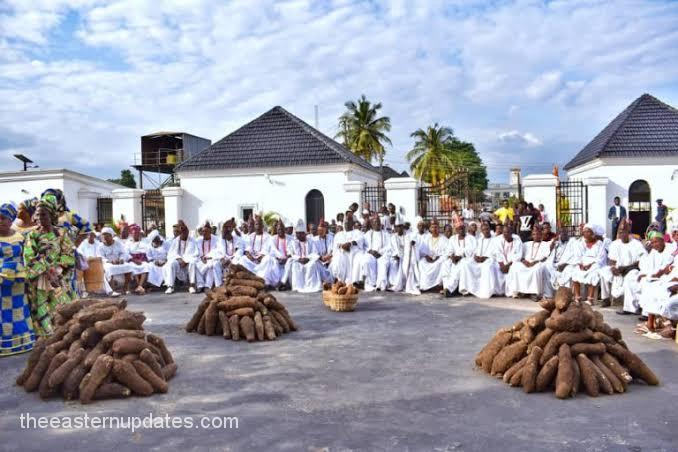 The Enugu State Police command yesterday prevented several members of the Ibagwa-Nike community from celebrating the New Yam Festival in the Enugu East local government area of Enugu state.
According to community members who were questioned, the incident sparked on Saturday when other cultural events that were planned as preludes to the Sunday festival began. The police then intervened, generating uncertainty in the neighborhood.
On Sunday morning, it was stated that the police deployed tear gas on the community people before facing the celebrants dispersing them and taking their tents to the divisional police station.
The police were parked at the market square, according to a reporter who attended the scene of the situation, but they didn’t make a comment.
Read Also: ASUU: NLC Members Sack Enugu State With Massive Protest
Abubakar Lawal, the state’s commissioner of police, stated that the issue was that some community members who were conducting a similar New yam event had a problem with the state’s Criminal and Investigation Department (CID), which the police needed to handle.
However, one of the community’s chiefs from the Umuanekeode clan, Mr. Valentine Eke, claimed that the issue was that the community was split among those who supported HRH Igwe Emmanuel Ugwu, the traditional ruler, and his own clan, which believes that the king was too autocratic in his management of the community.
According to Eke, such a problem would even arise with a simultaneous New yam festival in the community if the people lived in harmony with the king.
The state police command’s anti-robbery team was allegedly employed by the commissioner of police to arrest the community’s leaders in order to execute his deal with their ruler notwithstanding an active court order, according to the chairman of the community’s board of trustees, Chief Iyke Ngwu.
‘The use of Enugu State police commissioner, Abubakar Lawal and the divisional police officer in charge of Unity Police Division, one SP Eze by Igwe Emmanuel Ugwu of Ibagwa Nike to stop the entire Umuanaekeodo and the greater Ibagwa Nike community from celebrating their New Yam festival despite judgment and order of the Court of Appeal is an aberration,’ Ngwu said.
The monarch, Igwe Emmanuel Ugwu, responded to the incident by stating that there wouldn’t have been a problem if it had been a domestic celebration, however, the community had observed New Yam Festival earlier in the year and that the celebrants were responsible for the situation.
Igwe Ugwu claimed that those who hold communal rival New yam ceremonies are subject to a permanent court injunction.