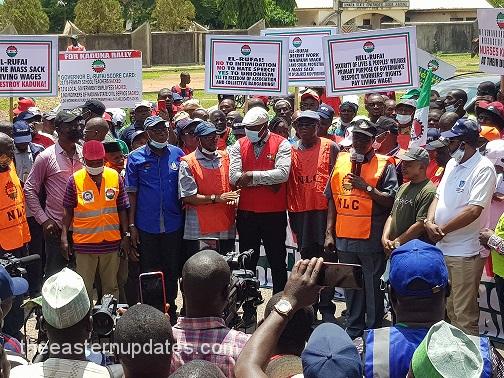 In lieu of the massive protest which had been scheduled by the NLC in solidarity with the lingering ASUU strike, some of the protesting members of Nigeria Labour Congress (NLC), have grounded activities in Enugu State as they blocked some of the major roads and streets in Enugu.

The protesting workers had also marched from the Labour House, close to New Market, to the Enugu State secretariat.

From the new sectariate the protesters moved through Old Artisan to Otigba junction. They are currently marching towards the Enugu State Government House.

In another report, ahead of next year’s Presidential elections, the Anambra State chapter of the Nigeria Labour Congress has thrown its weight behind the presidential candidate of the Labour Party, Peter Obi.

As a result, the workers have constituted a political mobilisation committee headed by a former NLC Chairman in the state, Comrade Charles Onyeagba.

Inaugurating the committee, the NLC Chairman in the state, Chinwe Orizu, said the decision to constitute the NLC Political Committee was an instruction from the national leadership of the body.