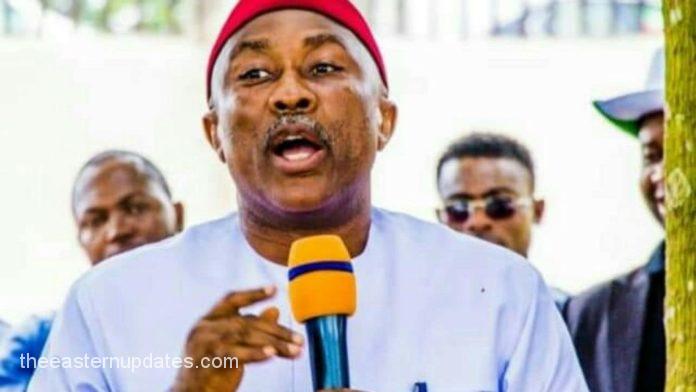 Uche Onyeagucha who is the 2023 Imo East Senatorial candidate of the Peoples Democratic Party, PDP for Imo State while reacting to the recent killing of some Imo State youths by the Ebubeagu has reiterated that the situation in Imo State was degenerating into a state of anarchy.

He had made this statement in Owerri, in a letter through his Special Assistant on media,  Macdonald Ebere on Tuesday, regarding the alleged killings by the Ebubeagu security outfit of the government and the closure of the Oziza Fm Radio station by the National Broadcasting Commission, NBC.

Onyeagucha described what has been  happening in Imo State as provocative and disheartening.

According to the statement, “The PDP Candidate for Imo East Senatorial District, Uche Onyeagucha has observed with consternation the recent closure of the Catholic-owned Radio Station in the state, Oziza 96.1 FM, by the National Broadcasting Corporation.

“Onyeagucha notes that this latest action by the  oppressive regime of Senator Hope Uzodimma, after the gruesome slaughtering of fourteen innocent Imo youths at Otulu which is provocative and disheartening.

“Regrettably,  rather than appealing to God for self-cleansing, Senator Uzodimma further prevailed on the NBC to shut down Oziza FM for uncovering the nefarious activities of his administration and exposing to the public, his slaughtering spree in Imo State particularly in the Orlu zone using his Ebubeagu militia.

“The instigated closure of the Radio Station is nothing but a calculated ploy by Governor Uzodimma to gag the press and other democratic voices in the state. We condemn in strongest terms, the draconian, strong-arm and headmasters/bravado tactics of Senator Hope Uzodimma to blatantly stifle free speech and independence of the press in the state.

“We call on Imolites, the Catholic community and people of good conscience to rise in solidarity against the further degeneration of Imo State into a state of lawlessness where democratic voices are gagged by the state government,” he said.