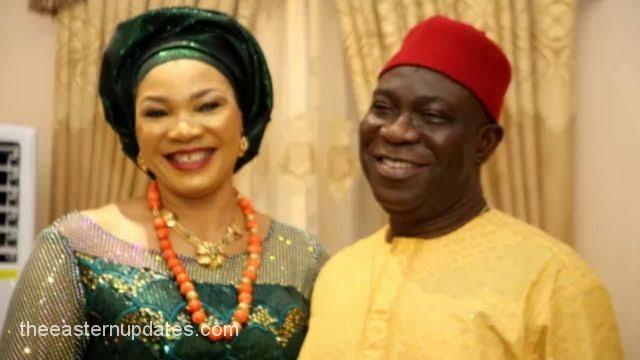 Beatrice Ekweremadu, the wife to Nigerian senator, Ike Ekweremadu has been accused of plotting to traffic a homeless man into the UK to harvest a kidney for her daughter has been granted bail.

Beatrice Nwanneka Ekweremadu, 55, together with her husband Ike Ekweremadu, 60, allegedly trafficked the 21-year-old to London from the streets of Lagos in order to harvest his organ.

They are accused of plotting to traffic him to transplant his organs to their daughter who suffers from kidney failure.

Ike, a barrister and former deputy president of the Nigerian Senate, and Beatrice, an accountant, appeared at the Old Bailey on Friday for a bail hearing.

The husband has been denied bail.

The Common Serjeant of London, judge Richard Marks, said: ‘The position is that I have granted bail to Beatrice subject to some fairly stringent conditions but I have refused bail to Ike.’

Prosecutors are not appealing the decision, the court heard.

Prosecutor Tim Probert-Wood said previously that the case involved ‘exploitation and the harvesting of an organ.’

Recall that last week, the trial of Ekweremadu took a new twist as a doctor has been accused of conspiring with him and his wife to traffic a young man into the UK to harvest a kidney for their daughter.

According to reports by the Mail Online, prosecutors told a UK court last Friday that the man, David Nwamini who was allegedly trafficked from Nigeria, was treated like a slave by the Ekweremadus before he eventually fled their UK residence.

The doctor, Obinna Obeta, 50, from Southwark, South London, is charged under the Modern Slavery Act with arranging the travel of a 21-year-old man with a view to him being exploited between August last year and this May.

A second charge alleges that he conspired with Ekweremadu to arrange or facilitate the travel of the man with a view to him being exploited.

Facebook
Twitter
WhatsApp
Email
Telegram
Previous articleWhy I Made A Case For The Release Of Kanu, Igboho – Ortom
Next articleEbubeagu: Anarchy Brewing Under Uzodinma – Onyeagucha