Women Group In Ebonyi Petitions IGP Over Attack By Ebubeagu 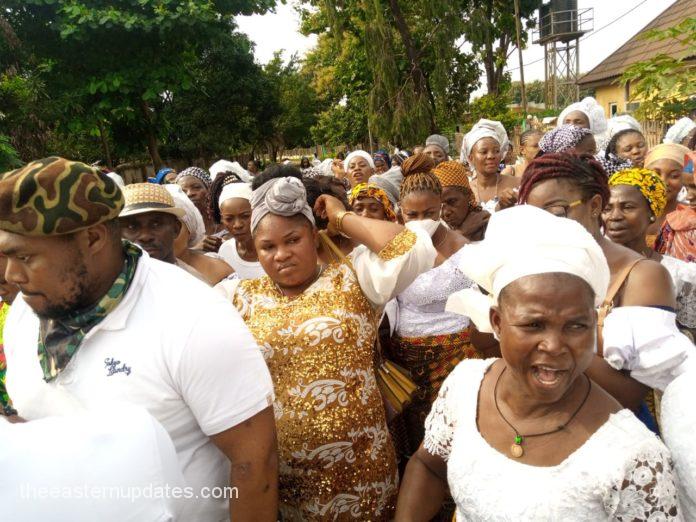 The women made this known in Abakaliki while protesting the operatives’ invasion of People’s Club premises along Abakaiki/Enugu Expressway which disrupted their meeting which was holding with the theme ‘Women, Nation Builders’.

They also alleged that their seats, canopies and event decoration items were confiscated by the operatives and taken away to their office in Abakaiki, the state capital.

Speaking to newsmen on behalf of other women, the President of Umuada Ebonyi Women, Mrs Charity Chukwuemeka, described the incident as sacrilege and attack on Igbo women and Igbo culture and urged the IGP and human rights organizations to call the security operatives to order.

‘The hard-working, peace fostering women of Ebonyi State under the aegis of Federated Ebonyi Women Organization, were on this day 20th of August 2022, unjustifiably attacked, embarrassed and chased out of the venue of their 2022 Annual August Meeting slated to hold in People’s Club Hall, Abakaliki.

‘It is not new or alien to the Igbo race that the entire women meet every August to discuss and chart the best possible developmental ideas and projects to improve the well-being and welfare of our people.

‘Notably, Annual August Meeting is not a partisan gathering as it cuts across party lines and even involves women who never belonged to any political party.

‘That these attacks are unreasonable and unwarranted infringements on the constitutional rights of the women of Ebonyi State which must not be tolerated.

‘That as mothers, we will speak to our sons and husbands to be in solidarity by standing with us in this protest against dictatorship.

‘That for unjustifiably attacking and humiliating our women in this sacrilegious manner, Ebonyi women hereby call on the Inspector-General of Police and civil rights groups to come to our aid,’ she said.

The Eastern Updates reports that Ebube agu is the regional security outfit in the South East.