HomeFeaturesGunmen Murder One, Abduct Businessman, Others In Imo
Features

Gunmen Murder One, Abduct Businessman, Others In Imo 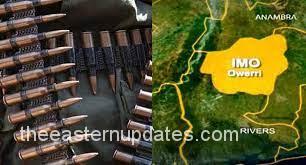 Gunmen suspected to be kidnappers yesterday evening killed an auto mechanic identified as Valentine Enwerem and kidnapped a businessman identified as Aloysius Onuekwusi.

The Eastern Updates gathered the late driver, who sensed the presence of the gunmen, tried to manoeuvre his way through but was immediately shot dead at close range.

It was also gathered that the deceased was from the Ikeduru Local Government Area of the state and his wife sells things beside his workshop.

After shooting him dead, the gunmen kidnapped the three persons he was carrying in a vehicle.

Onuekwusi was abducted around the same area in front of his house shortly after making a cash and rappers donation to Obilubi women during their 2022 August meeting.

According to the witness, ‘Our brother, Aloysius Onuekwusi has been kidnapped. An auto mechanic with a white Hilux on trying to negotiate a bend of the U-turn was shot dead. The gunmen fired many shots into the air to escape from the scene.’

He further said the development has brought the women’s August meeting to an abrupt end because the victim’s wife is the women’s leader.

The Police Public Relations Officer, PPRO in Imo State, Micheal Abattam, had yet to respond to an inquiry concerning the incidents as of press time.