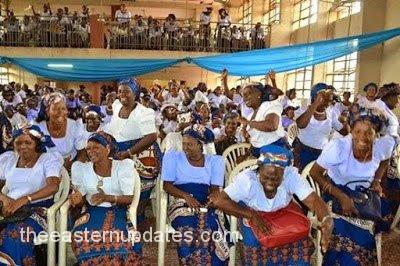 Some of the female indigenes of Ebonyi State under the auspices of the Federated Ebonyi Women Organisation, have come out to bitterly lament about the complete disruption and termination of their August Meeting by the Ebubeagu Security outfit in the state.

This is also coming on the heels of the Ebonyi State women taking a stand to petition the Inspector-General of Police, Alkali Usman; and the International Federation of Female Lawyers and rights organisations over the incident while making it clear that their rights of freedom of association had been trampled upon by the state government on Saturday.

The venue of the August Meeting, Peoples Club, Abakaliki, the state capital, was said to have been invaded by the Ebubeagu operatives in their vehicles.

In a communique signed after their press briefing by President of Umuada Ebonyi, Mrs. Charity Chukwuemeka; Coordinator, EBOWATAN, Hon. Amaka Chukwu; Chairperson of Ebonyi Windows’ Forum; among others, in Abakaliki, on Saturday, the women alleged that the Ebonyi Government was exhibiting actions detrimental to them, in the state.

The communique read, “This press briefing is aimed at calling for the aid of the press, IGP, FILDA, and rights groups to the desecration of the rights of women of Ebonyi State by Gov. David Umahi of Ebonyi State using Ebubeagu Security Network. The Nigerian constitution guarantees freedom of women. Articles 15(2) and 42 (1) a & b (2) (3) prohibit discrimination on the basis of sex and ensure that men and women have equal access to the courts in matters of contracts, torts and civil matters.

“The hard-working, peace-fostering women of Ebonyi State under the aegis of Federated Ebonyi Women Organisation, were on this day 20th of August 2022, unjustifiably attacked, embarrassed and chased out of the venue of their 2022 Annual August Meeting slated to hold in People’s Club Hall, Abakaliki.

“This abominable act was carried out by the Executive Governor of Ebonyi State, Engr. Dave Umahi, through his attack dogs, the Ebubeagu Security outfit of Ebonyi State.

“It is not new or alien to the Igbo race that the entire women meet every August to discuss and chart the best possible developmental ideas and projects to improve the well-being and welfare of our people.

It added, “Arising from the unwarranted disruption of this year’s August meeting, scheduled to hold this day, 20th of August 2022, our position are as follows:

“That these attacks are unreasonable and unwarranted infringements on the constitutional rights of the women of Ebonyi State which must not be tolerated.

“That as mothers, we will speak to our sons and husbands to be in solidarity by standing with us in this protest against dictatorship.

“That despite the hardship meted on the women of Ebonyi State through his unproductive leadership, he further attacked our women on this auspicious day, thereby subjecting us to further suffering.

“That he has infringed on the rights of the entire Ebonyi women and should be liable.

“That for unjustifiably attacking and humiliating our women in this sacrilegious manner, Ebonyi women hereby call on the Inspector General of Police and civil rights groups to come to our aid by ensuring that Governor Umahi’s agents whom he used to perpetrate these crimes are brought to book while Umahi’s militia known as Ebubeagu Security Network should be disbanded by the federal government.”

Reacting, the Special Consultant on Security to Ebonyi State Government, Chief Stanley Okoro-Emegha, said the Ebubeagu operatives received a security report that unknown gunmen will use the place to attack the state.

He said August meeting is not usually done in the town, but in villages, maintaining that those arrested will be prosecuted.