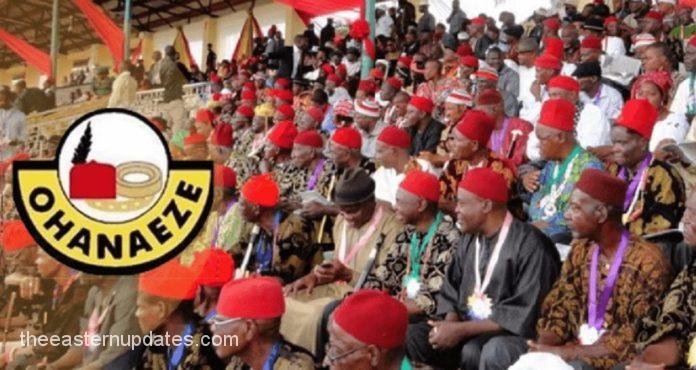 Apex Igbo socio-cultural organisation, Ohanaeze Ndigbo Worldwide, has appealed to the members of the Indigenous People of Biafra (IPOB) not to scuttle with the 2023 general elections in the South-East.

The Eastern Updates recalls that IPOB’s spokesperson, Emma Powerful, had in a statement, on Thursday stated that they (South-East) would not compromise their agitations for Nigerian politics.

He also stressed that IPOB did not believe in ‘Nigerian elections’, noting that their agitations were still intact and nothing would change the group’s resolve towards the ‘fight to achieve Biafra freedom through peaceful non-violent globally-accepted practices.’

Powerful was reacting to a statement credited to controversial Islamic cleric, Sheikh Gumi, who alleged that IPOB agitation had slowed down in the South-East since Peter Obi picked the presidential ticket of the Labour Party.

Speaking on the matter, the spokesperson for Ohanaeze, Chief Alex Ogbonnia, in an interview with reporters appealed to the group to sheathe their swords and avoid allowing their anger to consume them.

‘We appeal to our brothers in IPOB to allow the election to hold. Their agitations are understandable but they must not let their anger consume them.

Meanwhile, Ohanaeze Ndigbo has revealed that the key reason why was yet announced its preferred candidate for the 2023 presidential election, despite the endorsement of the candidate of the Labour Party, Peter Obi, by its counterpart in the South West, Afenifere.

It pointed out that the Igbo knew where they were going but did not disclose who among the presidential candidates of the various political parties would be endorsed.

Like Afenifere, the Pan-Niger Delta Forum and the Middle Belt Forum, Ohanaeze had called on political parties to zone their presidential tickets to the South-East.