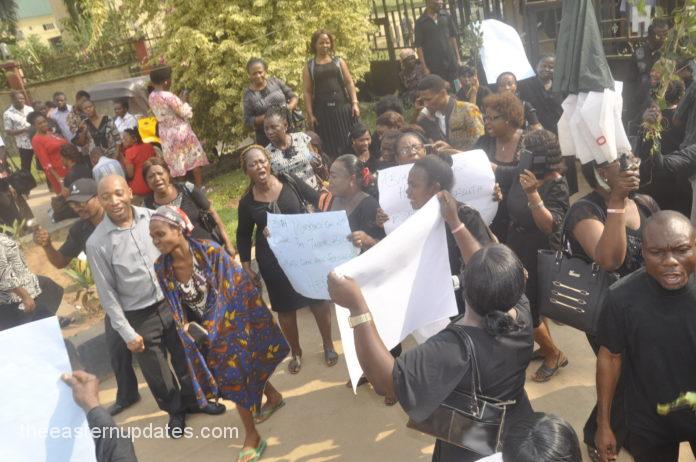 The atmosphere in the Obingwa Local Government Area of Abia State was a bit agitated as some of their women and youths on Thursday staged a massive protest while demanding the immediate removal and sacking of the council chairman representing the LGA, Michael Nwoke, from office over his alleged poor performance and terrible dispensatiuon of duties.

While reacting to the protest against him, Nwoke had however clearly stated that he was not perturbed by the protest as it had been  organised and orchestrated by a former deputy governor of the state who felt threatened by his dumping of the People’s Democratic Party (PDP), for the Young People’s Party (YPP).

Read Also: 2023: I Have The Answer To Abia’s Problems – Mascot Kalu

Nwoke was elected chairman on the platform of PDP, he left the party as a result of the fallout of the party primaries, for YPP where he is contesting the Obingwa/Osisioma/Ugwunagbo House of Representatives seat.

The protesters said under Nwoke as the LGA Chairman, peace has eluded the area, as several actions capable of leading to youth restiveness were being propped up by him. They also pleaded with the leaders of the Ngwa nation, especially those from Obingwa to ensure that every necessary legal step was taken to ensure Nwoke was removed from office.

The protest which took place at the council secretariat in Mgboko saw the protesters carry placards some of which read, “Michael Ibe Nwoke as ALGON chairman sacked LGA workers, local Government Chairmanship is a serious business, resign and go back to where you were before”.

Hon Ijeoma Ngozi, leader of the Obingwa protesting women said Nwoke had failed as a council chairman and called for his immediate removal.

“It’s barely five months for his tenure to be over and he has not done any meaningful thing for our people. We don’t have an office here as women as everywhere have been converted to tricycle confiscation centres.”

The leader of the youths, Chinkata Nwachukwu said initially they were hopeful Nwoke would turn things around for good in the LGA but regretted the council chairman has not lived up to their expectations and therefore called for his removal.

“We’ve gone round and we’ve discovered that almost all the buildings in the LGA secretariat are all dilapidated and nothing is working at all”, he said.

Reacting in a telephone chat, Nwoke said he had done nothing wrong that would warrant the protest which he said was sponsored by a former deputy governor of the state who felt threatened by his dumping of PDP for YPP.

“Those calling for my removal from office should know I am not the only office holder that left his former party to another.

“In Abia State, because of the impunity in PDP, over five persons including Senator Enyinnaya Abaribe, elected on its platform have left for other parties and I don’t know why my own should be an exception”.

Nwoke who said he would against all odds finish his tenure which will end in December stated he had no regrets about leaving the PDP.