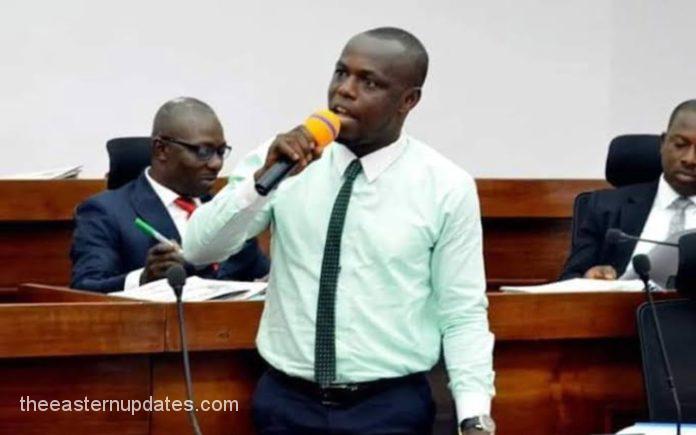 Honourable Obinna Ichita who is the lawmaker representing the Aba South state constituency in the Abia State House of Assembly, has openly reiterated that only a better political solution would remain the best option to resolve the Federal Government of Nigeria’s impasse with the detained leader of the Indigenous People of Biafra, Mazi Nnamdi Kanu.

Honorable Ichita had made this statement while he was in Umuahia while briefing some of the journalists in the State on Thursday.

He had also urged the Federal Government of Nigeria to heed appeals from eminent Nigerians to dialogue with Kanu and other agitators of self-determination with a view to finding a lasting solution to the rising tension in the country.

He advised the apex government “to view Kanu from the prism of a factor worthy of consideration in the search for lasting peace in South-East and not just as the cause of insecurity therein”.

Ichita added “When I earlier offered this advice to the Federal Government, I was positive that this view was borne out of a genuine and objective assessment of the situation in our land.

“Many people believe that the continued detention of Mazi Nnamdi Kanu and the refusal of the courts to grant him bail might not be unconnected to the statement allegedly made by the president in his response to the British Prime Minister when the minister reportedly enquired about the status of Kanu, who is a citizen of the United Kingdom.”

Speaking on the recent dismissal of Kanu’s bail application by the Federal High Court sitting in Abuja, the Abia lawmaker argued that the release of the IPOB leader would tremendously help to douse the growing tension in the South East.

He lamented that the South-East has had enough tension, hence the need to restore peace to the region.

“I am in support of a political solution to the issues that Kanu has with the Nigerian state.

“Many people hold the same view across the length and breadth of the federation, but there is always a solution to every problem. After all, many agree strongly that some issues raised by Kanu are germane. These can and should be addressed in this search for lasting peace.

“Importantly too, it is everyone’s desire to live in a condition of peace and justice. Let us, therefore, give peace a chance. Lasting peace is what will heal our land.

“Many believe that the release of Mazi Nnamdi Kanu should be considered in the search for peace and stronger national integration. Let peace reign,” Ichita noted.

He commended the IPOB leader for his appeal for peace during his last court appearance in Abuja, a development, which he said, had helped to douse tension in the zone, as many of his followers were no longer in doubt that he is alive.

He asked the federal government “not to jettison the advise of the special Igbo delegation led by Pa Mbazuike Amaechi to President Buhari on the release of Mazi Nnamdi Kanu”.