9 Killed As Fire Explosion Occurs At Illegal Refinery In Abia 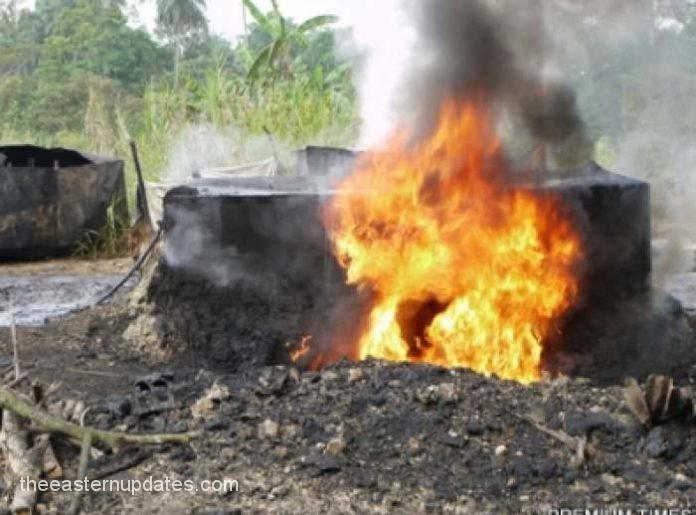 No fewer than nine persons have been confirmed dead following a fire explosion at an illegal refinery situated in Uzuaku Community in Ukwa West Local Government Area of Abia State.

The casualties were reported to have involved a husband and wife together with that of only son of another family.

The ugly occurrence which was said to have caused anguish in the homes of many families in the Community, happened on yesterday night.

According to reports, the Shell pipeline that services the Uzuaku/Owaza axis have not had crude oil running through the pipeline for some weeks leading to the stoppage of illegal oil bunkering activities in the area.

The Source added that the resumption of the pumping of crude oil along the pipeline within the week may have prompted the illegal refinery operators to go back to their business.

A community leader, who confirmed the incident, said while the persons that were burnt to death at the scene of the incident were buried immediately, a few others died later at the hospital and some were still recovering.

Meanwhile, the Senatorial aspirant of the All Progressives Grand Alliance (APGA) for Imo East Senatorial district, Mr Chyna Anthony, has blasted the federal government in their lackadaisical response over the loss of lives in the recent explosion at the site of an illegal refinery in Abaezi community, Ohaji Egbema, Imo State.

The party chieftain while speaking to journalists in Imo on Saturday blamed the federal government for the trend of poor Nigerians going into illegality to survive, including engaging in the business of illegal refineries across the Niger Delta and other oil-producing states.