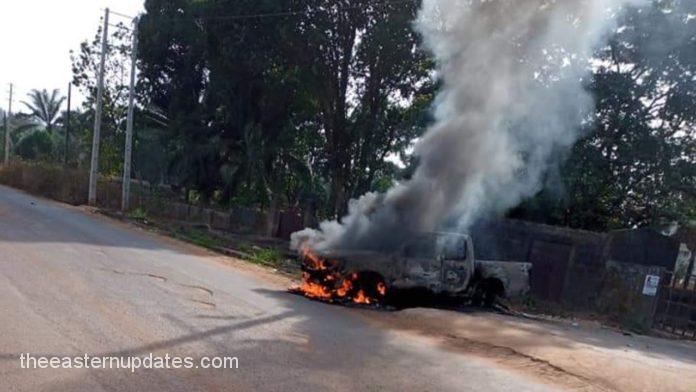 Gunmen, in the early hours of yesterday, killed no fewer than four persons in different parts of Anambra State.

The Eastern Updates gathered that two brothers identified as Godwin Ikechukwu Modobi and Nnajiofor Modobi were amonng those killed in Umuhu village in Ukpor, Nnewi South Local Government Area of the state.

A source close to the family who spoke to newsmen revealed that Godwin was a direct younger brother to Nnajiofor, and was also a former youth leader in the community.

While the two others were murdered along the Udorji Road, beside St. Mary’s Church, Ozubulu, in Ekwusigo LGA.

The source further disclosed that the gunmen first killed Nnajiofor right in their house, after which they blindfolded and abducted the younger brother, whom they also eventually killed close to Utuh Junction and dumped his corpse at the centre of the road.

A trending video from the scenes of the incident, showed the corpse lying lonely at the centre of the deserted expressway, without a vehicle or pedestrian coming or going through the road.

Fired bullets were also seen close to the corpse, lying in a pool of blood, with bullet wounds on his chest and other parts of the body.

Efforts to get the Public Relations Officer of the state Police Command, DSP Tochukwu Ikenga, proved abortive, as he was yet to respond to his message, at the time of filing this report.

The incident is happening less than four days after a similar attack was carried out at a beer parlour in Osumenyi, where five persons were killed.

The Eastern Updates gathered that the Gunmen had killed six persons, including a soldier, in the Anaocha and Nnewi South Local Government Areas of Anambra State.

Five of the victims were said to have been killed at a restaurant in Obiofia village, Osumenyi, in Nnewi South.

It was gathered that the assailants, armed with automatic rifles, cutlasses, and other dangerous weapons, invaded a military checkpoint in Agulu on Saturday and opened fire on soldiers, killing one in the process.