HomeFeaturesSoldiers Attacked By Gunmen At Checkpoint In Anambra
Features

Soldiers Attacked By Gunmen At Checkpoint In Anambra 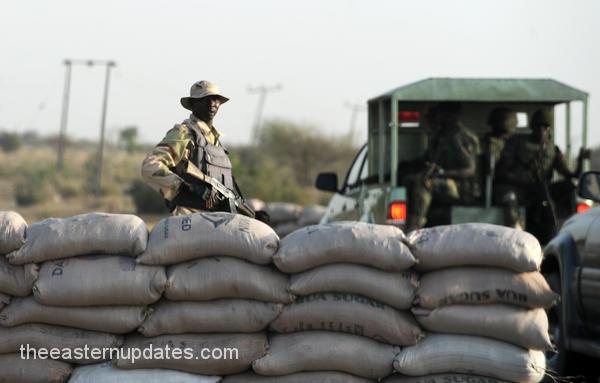 Some yet-to-be-identified gunmen on Saturday attacked soldiers at a checkpoint in Agulu, Anaocha Local Government Area of Anambra State.

The Eastern Updates gathered from credible sources said the gunmen wielded automatic riffles, cutlasses as well as other dangerous weapons, just as they came in their numbers to invade the military checkpoint.

According to eyewitness reports, the gunmen arrived at the checkpoint which was manned by soldiers and opened fire on them, causing the soldiers to reciprocate in the gesture. The shootout went on to last four almost two hours with both side only sustaining various degrees of injuries.

The source said the gunmen came in exotic automobiles numbering about four, suspected to have been snatched from unsuspecting members of the public for their nefarious operations.

‘They confronted the soldiers for over 10 minutes, causing residents of the area to scamper for safety, and after a long shooting match, the men overpowered the soldiers, and they had to withdraw.

‘The men did not cover their faces, and they were shouting on top of their voices, asking that Nnamdi Kanu, leader of outlawed Indigenous People of Biafra, IPOB, be released.

‘We saw them, some people even tried to make videos, but everyone was afraid not to be spotted and shot,’ the source told The Eastern Updates.

In the meantime, the Anambra State Police Command has confirmed the incident, while also condemning it as an attack on the checkpoint which was more like an attack on the Federal Republic of Nigeria.

DSP Toochukwu Ikenga who spoke to reporters on Sunday morning said: Generally speaking, any attack on any security agent is a threat to the soul of a nation. Yes, there was a shooting incident at a checkpoint in Agulu but the information is still sketchy.’

There has been a growing trend of attack by unknown gunmen in several parts of the South East in recent times.