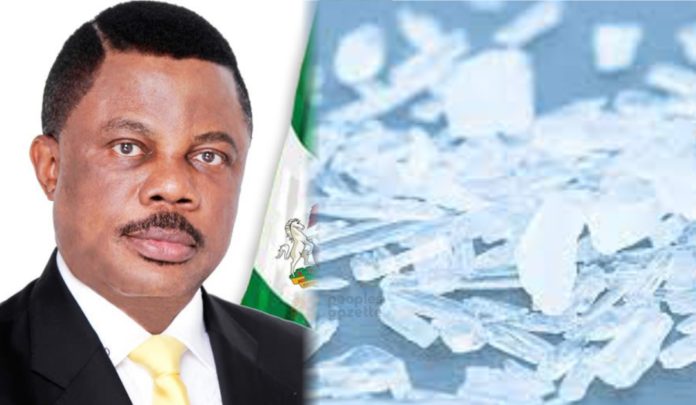 The Government of Anambra State has announced that it has inaugurated a committee that will work towards rehabilitating youths in various communities in the State, who are addicts of methamphetamine, popularly known as mkpurummiri in the South east.

Commissioner for Health, Dr. Vincent Okpala made this disclosure during a meeting with traditional rulers at the Government House, Awka.

The Commissioner said: ‘The State government has inaugurated a committee that will see to the rehabilitation of those who abuse crystal Methamphetamine across the state.

‘The committee is made up of health experts, psychologists, officials of the National Drug Law Enforcement Agency, the police among others, and seek the cooperation of Ndigwe Anambra to enable the committee work seamlessly.’

The abuse of methamphetamine in the State became prevalent last year, with communities rising against its consumers.

Most communities adopted a special sanction for abusers of the drug which involved tying them to pillars at community halls, or trees in village squares, and flogging them mercilessly.

Some youths who were meted such treatment were reported to have died after they were flogged for consuming the substance.

The health commissioner, however, said that rehabilitation by the committee would be a professional thing, and would not involve merciless flogging of the abusers of the substance.

In a related development, some unidentified youths on Saturday murdered a 27-year-old man identified as Darlington Ugboaja, who was found with crystal meth or Methamphetamine, a nervous stimulant known in local parlance as ‘Mkpurummiri’.

The Eastern Updates gathered that the killing has led to tension in Anara Market in Isiala Mbano local government area of Imo State where the incident occurred.

Panic-stricken traders quickly closed their shop for fear of a reprisal from the victim’s kinsmen.