Anambra: Soludo, Kinsmen Visit Obiano On A Thank You Visit 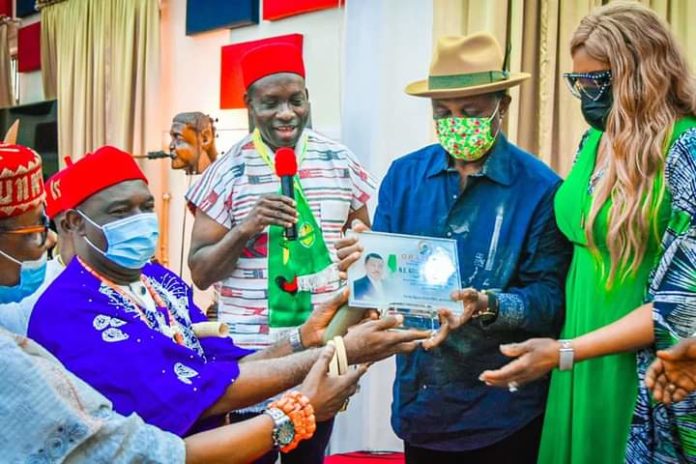 The delegation, which visited Obiano and his wife in their home at Aguleri, thanked him for stamping his feet on the ground to ensure that their son, Soludo was elected.

The delegation also presented him a gift, while members, consisting of revered clergymen, statesmen and others, showered him with praises.

Soludo while speaking about the visit said: ‘Today, I joined critical stakeholders and leaders of the Old Aguata Union (OAU) – a geopolitical bloc of Ndị Anambra comprising the current Orumba North, Orumba South and Aguata Local Government Areas – on a ‘Thank You’ visit to the Governor of Anambra State, His Excellency, Dr. Willie Maduaburocbukwu Obiano.

‘While thanking God for his boundless grace before, during and after the process that has brought about my emergence as the Governor-elect, I must not forget to thank the human elements instrumental to the actualisation of this mandate. Dr Willie Maduaburochukwu Obiano showed character, forthrightness, and courage deserving of mention and emulation.

‘I consider this a rare privilege to serve ndị Anambra. And the greatest appreciation would be to provide quality service and purposeful leadership that would elevate the developmental trajectory of our dear State for the good of all.’

Meanwhile, in early December, The Eastern Updates had reported that a total of 11 political parties and their candidates on Wednesday filed petitions at the Anambra governorship election petition tribunal.

The parties and their candidates are challenging the declaration of the candidate of the All Progressives Grand Alliance (APGA), Prof. Chukwuma Soludo as the winner of the poll by INEC.