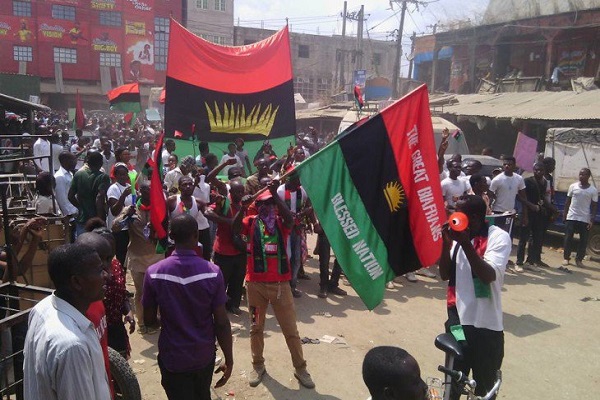 Members of the Indigenous People of Biafra (IPOB)  have alleged that there is an ongoing mass arrest and secret killings of indigenes of Orsuihitekwa, Nkwere and Orlu in Orlu Local Government Area of Imo State by a combined team of Nigeria security agencies labelled them as members of the group.

In a statement by its spokesperson, Emma Powerful on Thursday, the group claimed that security agents seven months ago invaded Orsuihitekwa and environs with armoured tanks and fighter jets while on a mission to fish out its members who they accused of being behind the killings in the area.

He said the invasion led to the death of many innocent people even as he accused Governor Hope Uzodimma of being insensitive to the plight of those killed.

‘It is yet to be reported in the media. So many people ran away abandoning their ancestral home and lands, but Uzodinma doesn’t care about the fate of these innocent folks. Few months back some villagers returned  to the village only to discover that their village had been taken over by hoodlums and bad gangs.

‘But unfortunately, when these innocent folks alerted security agents of this sad development, instead of the double-faced and compromised security agents going after the bad boys, they rather resorted to mass arrest of the innocent youths in the community after a gun duel with the hoodlums. What a country! The mass arrest of innocent youths of Orsuihiteukwa took place on December 13, 2021 and  26 people from the community were involved in the arrest.’

Powerful called for the unconditional release of all those wrongfully arrested by security operatives in the state.

‘These people are innocent and should be released unconditionally. They are not criminals as being tagged by the security agencies. Nigeria security must stop unleashing mayhem on the people  because they are Igbo or Biafrans. The corrupt politicians who connive with the security agencies to oppress our people should be ready for the day of accountability for it will surely come.’

Meanwhile, the Government of Imo State have vowed to release the names of the sponsors of terrorism in the State on the 3rd of January. A move which has generated so much controversies over the last few days.