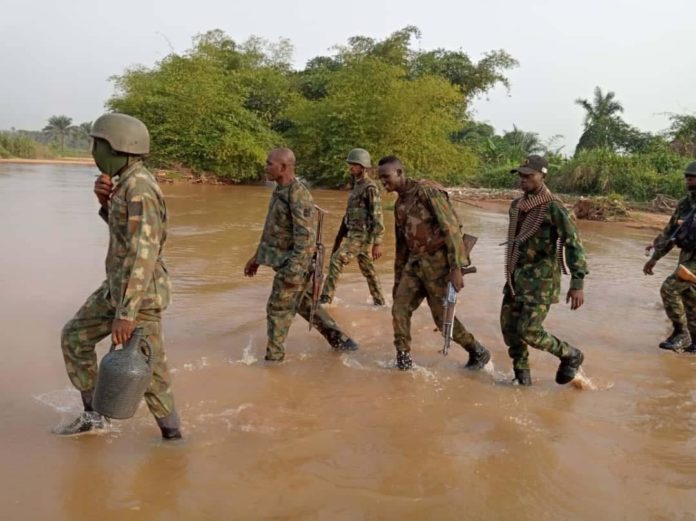 A group known as the International Society for Civil Liberties and Rule of Law has tackled the Nigerian Army over its recent claim that it arrested a leader of the Indigenous People of Biafra (IPOB) and commander of Eastern Security Network (ESN) in Enugu State.

The group made this known, yesterday, in a statement titled: ‘How The Nigerian Army Disrupted Christmas Eve Church Services and Movements at Egudene-Nkanu, Killed Two and Arrested a 40-year-old Mason and Labeled Him ESN Commander’ which was made available to newsmen.

The Eastern Updates recalls that the Nigerian Army had on December 26, 2021 claimed that its troops arrested one Godwin Nnamdi, who it described as ‘a suspected leader of IPOB and ESN.

Army spokesperson, Onyema Nwachukwu, confirmed the arrest in a statement, saying, the ‘notorious leader’ was arrested in Nkanu East Council of Enugu during a clearance operation in the area.

But the group said the army cooked up the statement to cover backlash and outcries arising from its murderous operation on December 24, 2021 at Egudene-Ekpofu.

‘A detailed investigation carried out by the International Society for Civil Liberties and Rule of Law and contrary to the Nigerian Army claims, the so-called ESN Commander, who it identified as Godwin Nnamdi, is a 40-year-old mason and struggling father of two.

‘His true name is Citizen Godwin Nnaji (not Godwin Nnamdi). He hails from Umuode-Ega Kindred of Egudene in Ajame-Amaeze Autonomous Community, Ekpofu in Nkanu East Council of Enugu State.

‘He was unarmed and was abducted from his sleep following his sick-rest arising from work-related stress and pains. He had taken some pain relief tablets and was sleeping when soldiers stormed his family house at 12:21a.m. on December 25, 2021 and abducted him,’ the group stated.

It also explained that his mother- Theresa Nnaji and two of his siblings, including his blind younger brother, Onyema Nnaji, who was also rough-handled and assaulted, were in his home when the deceased was abducted.

‘After his abduction, Nnaji was bundled alongside others to Onokolo Market Square in the Community where he was mercilessly beaten and stripped half-naked. He was detained at ‘Galaxy Detention Camp’ of the 82 Division and one of his younger brothers who went to see him, but the Army denied him access to his brother,’ the group added.

It, therefore, restated that the claims by the Nigerian Army were circumstantially fallacious and trademark of the Nigerian security forces.