Agony As Shops, Houses Are Destroyed In Ebonyi Fire Outbreak 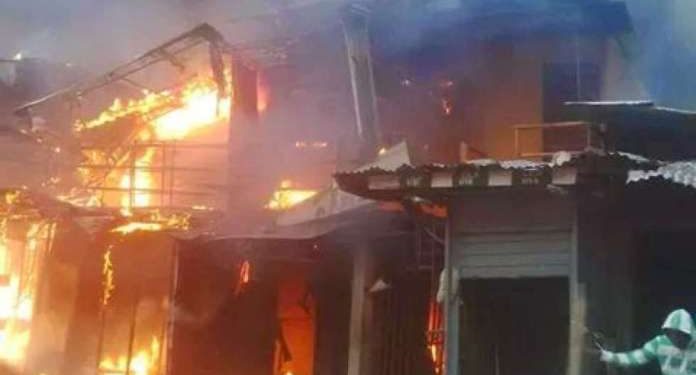 A fire outbreak has gutted some houses, lock-up shops, and property worth millions of  Naira around the Mile 50 layout, off Mile 50 road in Abakaliki, the Ebonyi State capital.

The Eastern Updates gathered that the incident was reported late Monday at Aliugbala Eze Street.

The Assistant Superintendent of Police in the state, Mr Yakubu Zekeri, who confirmed the incident to Channels Television, said no life was lost.

He also stated that none of the occupants of the buildings sustained injuries.

According to Mr Zekeri, the timely intervention of men of the state fire department helped to prevent the inferno from spreading to other buildings nearby.

In a related development, the Government of Anambra State has commiserated with former Anambra State Governor, Mr. Peter Obi, and his family over the fire incident which destroyed the multibillion Next International shopping mall in Abuja, owned by the family.

In a press release about the fire incident which happened on December 26, The Commissioner for Information and Public Enlightenment in the State, Mr C Don Adinuba emphasied the business concern was a testimony of industry of the former governor, and the spirit of Igbo people.

He said: ‘It is regrettable that this huge complex, the biggest shopping mall in the Federal Capital Territory, should go up in flames on a day the whole world was still rejoicing with Christendom over the birth of Jesus Christ some 2,000 years ago.

‘It is a tremendous loss to not just the Obi family or the people of Anambra State who are famous the world over for their entrepreneurial skills or the Federal Capital Territory where the mall is located but the whole country’.

The government further stressed that Next International, whether in Abuja or Lagos, or anywhere else, is a testimony of how Anambra people start small enterprises and in no time grow them into multibillion naira businesses.