Two Killed As Car Rams Into Stationary Tipper In Anambra 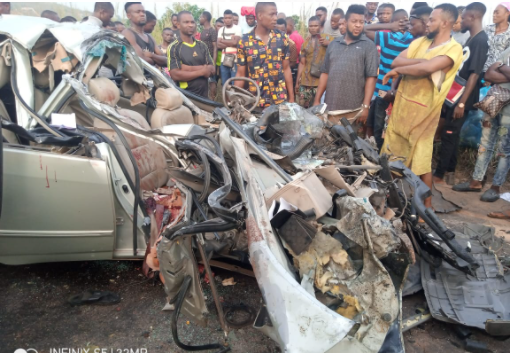 No fewer than two persons lost their lives in Anambra State yesterday morning, after a Toyota Corolla car in which they were travelling rammed into a stationary tipper.

The Eastern Updates gathered that the crash occurred at Ogbunike, off the Awka – Onitsha Expressway.

According to an eyewitness: ‘The driver of Toyota car suddenly rammed into the tipper which was stationary, after developing mechanical fault while climbing the hilly road.

‘The tipper developed fault while climbing the road and the Toyota Corolla rammed into it from the rear, leaving the two occupants dead on the spot.’

He commiserated with the deceased families, urging motoring public to maintain safe speed limits and ensure their vehicles were in good condition before hitting the road.

He said, ‘A fatal Road traffic crash Occurred at Ogbunike hill by slaughter, by Onitsha-Awka express way today 7th December, 2021 at about 0700hrs.

‘The probable cause of the fatal crash was attributed to Road Obstruction (OBS) and excessive speed.

‘The dead Victims were taken by their families while the FRSC rescue team are on ground controlling traffic.’

He said an aggressive crowd trooped out to the scene and threatened to burn the truck involved, but we’re calmed down by personnel from his command.